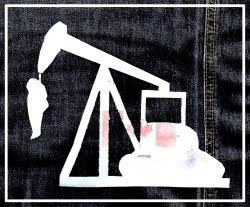 Canada has been involved in oil and gas in Colombia since the 1920s, when the Canadian-based International Petroleum Corporation (IPC), then a subsidiary of Standard Oil of New Jersey, owned Tropical Oil and the Andian Pipeline Company. When ownership of these companies was due to revert back to the Colombian state in 1951(concessions at the time were for 30 years), IPC feared that it was going to lose both companies. So the foreign company tricked the Colombian government into believing that Andian was a separate company from Tropical, even though they shared the same parent company. These shenanigans earned Andian National a new concession, who then established its new head office in Canada until the 1970s.

A new free trade agreement between Canada and Colombia and the strong presence of Canadian companies in Colombia’s oil and gas sector indicates that the Colombian government no longer has to be tricked into handing over its natural resources to Canadian corporations. Instead, it will continue to do so willingly, in the name of increasing foreign direct investment.

On June 29, the Canada-Colombia Free Trade Agreement (CCFTA) went through the final stages in Canada, effectively becoming law. The final legislative legwork is with the Colombian Congress, which has to implement a series of laws in order for the agreement to be finalized.

In Canada, unions and human rights organizations led the opposition to the CCFTA , but they failed to rally popular outrage against the agreement. The passage of this controversial agreement, however, can’t be attributed only to the ineffective opposition to it, especially not when those actively organizing in its favor constitute a powerful swath of Canada’s corporate elite.


The day after the CCFTA became law in Canada, Perrin Beatty, CEO of the Canadian Chamber of Commerce, stated, “our members are pleased with the government’s commitment to move this trade agreement forward.” When Beatty wrote a letter to encourage the government to pass the CCFTA in May of 2008, nine members signed on in support. Three of them were representatives of oil companies, all of them based in Calgary, where Stephen Harper’s conservative party has an important base: Enbridge, Nexen and Talisman.
While Colombia doesn’t have the oil reserves to compete with Venezuela, it is estimated to have the fifth largest oil reserves in South America. According to a 2010 report by Oil and Gas Journal, Colombia has 1.36 billion barrels of proven crude reserves. This year, Colombia’s National Hydrocarbons Agency estimates that the country will produce 800,000 barrels of crude per day. 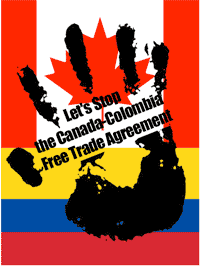 Over the past years, Colombia’s oil and gas sector has grown rapidly. The country is becoming an increasingly attractive destination for foreign investment in the oil and gas sectors for various reasons, including better security conditions for operators, and favorable legislation introduced in 1999 to encourage investment.
In 2003, the United States announced additional funding of $98 million to have Green Berets and private contractors train the XVIII brigade, an elite unit of 2,000 Colombian soldiers deployed specifically to protect the Caño Limón-Coveñas pipeline. Pipeline attacks and acts of sabotage were down to 32 in 2009, compared to 106 in 2006.

In 1997, the Canadian International Development Agency and the Canadian Energy Research Institute, based in Calgary, teamed up with a Colombian law firm and a number of oil companies to draft a new set of laws governing private investment in the oil and mining sectors. New legislation favoring foreign direct investment in both sectors was approved in 2001.

Recent developments have made the oil and gas sector even more appealing for foreign investors. Ecopetrol is the largest corporation in Colombia, and since 2007 has acquired much of the country’s pipeline infrastructure. The company controls 100% of Colombian refining, 55% of oil production, 60% of gas production, and 79% of existing pipelines, equivalent to 8,815km of pipeline. Though Ecopetrol was founded in 1951 as a state company, it is now a mixed corporation with 89.9% owned by the Colombian state, and 10.1% ownership by shareholders. The company is listed on the Colombia Stock Exchange (BVC) and the New York Stock Exchange.

Ecopetrol has promised to invest $60 billion in exploration, infrastructure, transportation, refining, production, marketing, and acquisitions between now and 2015. This year alone, the company will spend $6.9 billion. One of the first projects will be the construction of a new, $3.5 billion pipeline from the city of Ariguaney in the department of Meta to the port of Coveñas in the department of Sucre.

These developments make Colombia “one of the world's fastest growing and most important energy development stories,” according to Luke Burgess, writing on an energy sector website in May. The billions of dollars that Ecopetrol and the state plan to invest in oil and gas infrastructure and exploration mean investors have “huge opportunities for easy profits.” 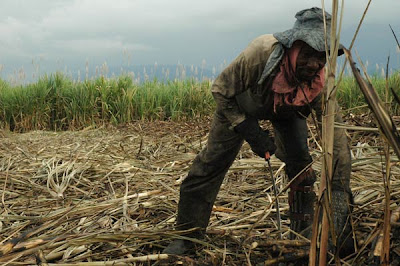 In addition to favorable conditions for investment, the government promised that the military would train a battalion of soldiers to assist companies in obtaining and transporting seismic testing results in parts of the country where there may be operational risks. This represents the first time that the Colombian army will provide troops for companies in the exploration phase, as previously it was limited to protecting oil and gas production and transportation in the exploitation phase.

In June, the National Hydrocarbons Agency put 168 oil and gas concession blocks covering over 50 million hectares of land on auction to foreign and national exploration and production companies.

As companies bid for concessions on June 22 at the Cartagena Convention Center in Colombia, Energy and Mining Minister Hernán Martínez made a special announcement.

"I have some good news for our Canadian friends. The Senate has just approved a free trade agreement . . . so that opens the way for a lot of opportunities and our government is very happy about that,” said Martínez.

In total, 78 blocks were awarded to Ecopetrol along with companies from the United States, Brazil, Norway, and elsewhere. Four Canadian companies, Pacific Rubiales, Alange, Gran Tierra Energy, and Petrominerales won exploration blocks as a result of the auction. The Canada-Colombia FTA is an added incentive for these corporations to maintain their headquarters in Calgary, as it provides investment protection clauses that guarantee the security of their investments in Colombia. 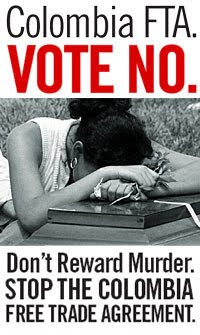 These companies will join other Canadian firms in making haste to expand their interests in Colombia. Talisman Energy just announced that it will partner with Ecopetrol to purchase all of British Petroleum’s operations in Colombia for a total of CDN$1.9 billion.

But it is also clear that oil and gas projects in Colombia operate with the direct support of the scandal-ridden Colombian Army, and often in close cooperation with paramilitary, guerilla and private security forces whose hands are covered in blood. Any attempt to hide these atrocities behind a Canadian flag will be a failure, as these companies and both governments are already well aware of the high social and environmental costs that will accompany increased oil and gas development in Colombia.

Dawn Paley is a NACLA Research Associate.
Posted by Next Year Country