China hopes to mine hydrothermal vents under the Indian Ocean for metals used in gadgets like mobile phones.

By Michael McCarthy
The Independent 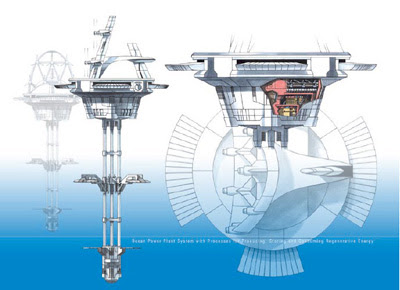 Concerns about large-scale marine pollution, fuelled by the Gulf of Mexico oil spill, are set to be heightened by a new development in exploitation of the oceans: deep-sea mining.
The Chinese government has just lodged the first application to mine for minerals under the seabed in international waters, in this case on a ridge in the Indian Ocean 1,700 metres (more than 5,000ft) below the surface.

The Chinese are hoping to recover valuable metals such as copper, nickel and cobalt – used in mobile phones, laptops and batteries – as well as gold and silver, in an area of currently inactive "hydrothermal vents", underwater geysers driven by volcanic activity.

Some of the vents, known as "black smokers", are black chimney-like structures which shelter their own ecosystems of little-known creatures, while emitting a cloud of hot, black material containing high levels of sulphur-bearing minerals, or sulphides.

Having explored the area using remotely operated underwater vehicles, the Chinese want to mine the sulphide deposits of a region of seabed in the south-west Indian Ocean for the rich mineral ores they contain. They have already applied to do so to the International Seabed Authority (ISA), the Jamaica-based body set up under the 1982 UN Convention on The Law of the Sea to deal with the liabilities relating to seabed exploitation and the environmental damage it may cause.

The application, which will be heard at a meeting next April, is the first to be made for permission to mine in international waters, but it is likely to be followed by many more, especially if the Chinese succeed. A major seabed sulphide-mining project is already under way in the waters of Papua New Guinea, run by the Toronto-based company Nautilus Minerals.

The environmental worries thrown up by the prospect of deep-sea mining are considerable, not least after the Gulf oil spill, which has become an intractable problem owing to the depth of the seabed where the well is sited. It has become clear that once something goes wrong at such a depth – in this case 1,500 metres, or nearly 5,000ft – putting it right is immeasurably more difficult than at the surface.

Although no one knows exactly what damage a deep-sea mine would do to the marine ecosystem, experts have no doubt that removing a considerable part of the sea floor would cause a major disturbance.

Not only that, but plumes of sediment – which may well be toxic – could have an impact over a much wider area, especially for filter-feeding marine organisms, which are common on the seabed. Such plumes might also block out light, hindering the development of plankton.

"At the mouths of these hydrothermal vents are some of the world's richest but least-known ecosystems, and the potential for conflict between commerce and conservation is huge," said Charles Clover, author of The End of The Line, the best-selling indictment of over-fishing, which has been made into a widely praised film.

The Chinese were taking it very seriously, Mr Clover said. "The reality is, they are identifying gold mines under the sea. The Chinese have played this by the book, but they lodged their application on the very first day it was possible, on the first day of the compliance regime for mining sulphides, which had taken the ISA seven years to establish."

Richard Harrington of the Marine Conservation Society (MCS) expressed similar concerns: "This is seriously deep exploitation of our sea floor and in the first instance we would question if this strategy would really be economically viable," he said.

"We've seen how difficult it has been to cap the oil in the Gulf – would the risk of an accident be worth taking? MCS is currently campaigning for marine protected areas to ensure protection of the sea bed around UK waters, where the damage to the marine environment from activities such as dredging and trawling are all too obvious.

"Deep sea mining would take this sort of damage to a new level in the wider oceans. Conditions at this depth are normally very stable, and any mining damage would impact the environment for a very long time."

Interest in deep-sea mining began in the mid-1960s with the publication of a book by JL Mero entitled The Mineral Resources of The Sea, which suggested that there was a near-limitless supply of certain metals contained in manganese nodules, potato-sized lumps of compressed sediment on the sea floor at depths of 5,000 metres or more. Over the next 20 years, the US, as well as France and Germany, conducted research projects on nodule mining, but these were eventually abandoned after hundreds of millions of dollars had been spent.

However, over the past 10 years the demand for metals from the exploding economies of the main developing countries, led by China, has led to a resurgence of interest in sea-bed minerals; the focus for this has now switched from nodules to hydrothermal vents, discovered by American scientists in 1977 in the Galapagos rift in the Pacific seafloor. Now they have been found all around the world, and have astonished scientists with the teeming communities of specialised deep-sea animals they support in the darkness – often at temperatures of more than 400C.
Posted by Next Year Country