What is Global Warming and the Greenhouse Effect? 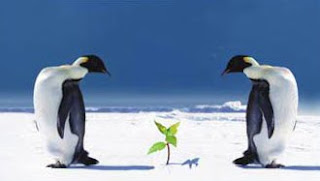 Climate scientists are telling us that gases like carbon dioxide are causing global warming. Carbon dioxide is produced when petrol is burned in your car engine, or when coal and gas are burned at power-stations to make electricity. Carbon dioxide causes global warming because it contributes to the so-called greenhouse effect. So what is this greenhouse effect?
Winter is a good opportunity to observe the greenhouse effect in action. It should be obvious that sunlight heats the earth: it gets hotter when the sun shines, and colder at night when it doesn't. On clear dry nights it can get very cold indeed, but if the sky is cloudy, or overcast, then it doesn't get so cold. This happens because clouds trap heat. The more clouds there are, the warmer it stays overnight.

So how does this heat trapping work? And how does carbon dioxide come into play?

You know that radio stations have different frequencies. When you tune your radio to your favourite station, you are telling your radio receiver to block all radio-frequencies except those that the station uses. These frequencies are allowed into the radio's electronics.

Of course, this is a simplified explanation of global warming, but the basic story I have just told you is correct. Scientists have known and understood this for over 100 years, and it has been confirmed in laboratory experiments. There is no doubt about the basic science behind global warming.

So does it really matter that driving a car and using electricity adds more carbon dioxide to the atmosphere? In my next segment, I will examine why scientists are convinced that if we are not careful, the earth will warm 2 or more degrees, and I will examine what the consequences of this will be.

The message for today, however, is that anyone who tells you that carbon dioxide does not cause global warming, either does not understand the basic science, or is being deliberately misleading.
Posted by Next Year Country