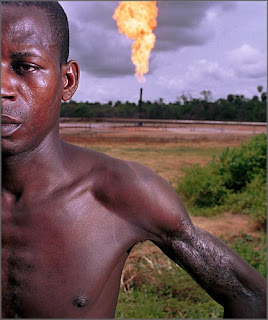 For decades on end this African country has been confronted with oil slick after oil slick without anything being done to put an end to them, or even to clean up the mess.
Oil spills do not provoke the same sense of outrage everywhere. On May 1st, as the oil spill in the Gulf of Mexico mobilized the whole planet, an oil pipe broke off the Nigerian coast, and four million litres of crude oil leaked out in one week, spelling disaster for the local population whose shores are devastated. Yet, for the Niger delta, this was only one in a continuous series. In fact, last July Amnesty International published a report in which the disaster was called a “tragedy for human rights”. “The estimate is that every year now and for fifty years as much oil as leaked from the Exxon Valdez has been spilt over the delta,” the report noted, adding that “the pollution is there for all to see.” Thirty one million people “squelch about in the oil while air and water are polluted by flaring [1], and fishermen catch fish poisoned by heavy metals.”

N’Nimo Bassey, president of Friends of the Earth (Nigeria), is furious: “We are getting new oil spills practically on a daily basis,” he explains. “Some have been going on for several months without anything being done to stop them or to clean the coasts.”

The largest maritime reserve on the African continent, the Niger delta is also one of the three largest offshore drilling areas in the world. Total, Exxon, Chevron, and above all, Shell, all jostle for a share; but these oil companies put the blame for the spills on sabotage and attacks by local rebel groups. To Amnesty, this poor version only serves to hide the fact that corroded oil pipes are generally to blame for the leaks, and that safety regulations are not observed. As the report also pointed out, “oil companies take advantage of the lack of adequate regulations in Nigeria.” 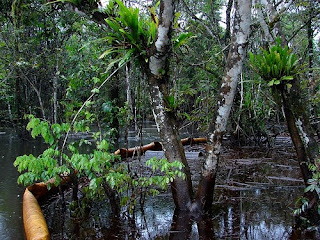 Indeed, there are no international regulations for offshore drilling. “While the transport of oil is subject to a convention set up by the International Maritime Organization,” Yann Rabuteau, a specialist lawyer explains, “legal instruments for regulating offshore operations are almost non-existent.” It belongs to each state to lay down its rules and enforce them and the same is true as concerns the repair of damages. “Thirty years ago, a convention (called the Clee convention) was drafted by the IMO,” but never got finalized, owing to the persistence of conflicting interests.