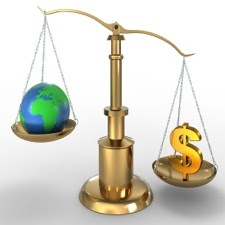 A broad coalition of activists are charging that as much as a third of all Kyoto Protocol carbon offset credits ever sold to banks and governments could be illegitimate because they were generated by firms manipulating the marketplace.

Companies, the activists allege, are deliberately generating greenhouse gas pollution in order to snag millions of dollars worth of carbon credits when they then mitigate the emissions. Many chemical manufacturers also seem to be tweaking their systems to generate as much emissions as possible, only reverting to normal pollution levels once they've hit their maximum annual offset credit allowance.
Read more here.
Posted by Next Year Country