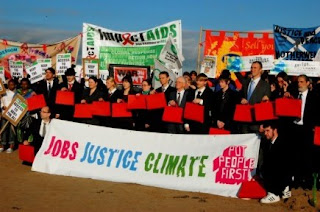 One week from today, the 2010 People’s Summit – a weekend of popular resistance to the G8 and G20, teeming with exciting, diverse, and democratic responses to an unjust system – will begin at Ryerson University, with allied events at the University of Toronto. The 2010 People’s Summit's includes three days of workshops, panel discussions, skillshares, interactive arts events, film screenings and more, all running from June 18th to 20th.

While the billion-dollar-plus G8 and G20 Summits actively prevent the democratic participation of the global majority, the voice of the people will be loud and clear at the People's Summit. “The People’s Summit is the democratic alternative to the G8 and G20 Summits, where everyone is welcome,” says Marya Folinsbee, Coordinator of the People’s Summit. “People – individuals and civil society organizations – from across Canada and the world are coming to advance a People's agenda, where real solutions to the economic crisis, climate change, human rights abuses, and global injustice will be explored. Unlike the G20, this Summit is an inspiring example of the power of the people to build a more just world.”

Highlights from the People’s Summit include a Friday evening opening celebration: "Stories and Solutions from North and South". Hosted by Mary Walsh, and featuring speakers from across the globe and great entertainment, the event is open to all.

“The Canadian government has become an international embarrassment due to its hypocritical positions and misplaced priorities on a wide variety of issues, ranging from climate change to indigenous rights,” says Dylan Penner, a spokesperson with the People’s Summit. “The G8 and G20 exclude billions of people while making decisions that impact all of us. They refuse to take responsibility for steering the global economy into recession; instead of changing course now to chart better policy, they want to go further down the road of privatization and corporate globalization.”

The 2010 People’s Summit will bring together people from all walks of life working for solidarity, self-determination, human rights, a people’s economy, justice, peace, a healthy planet, and transformative social change. Workshops will educate and empower participants to take action on climate justice, defend civil liberties, build healthy communities, understand and transform a flawed financial system, and take direct action in resistance to the G8 and G20 agenda.

The website of the People’s Summit is http://www.peoplessummit2010.ca/.
Registration is free and open to all.

After the People's Summit, The Toronto Community Mobilization Network is providing infrastructure and logistical support to events, protests and actions taking place between June 21 and 27, 2010 within a framework of respect and solidarity. Details of activities, outreach material and other information can be found at http://www.g20.torontomobilize.org/.
Posted by Next Year Country