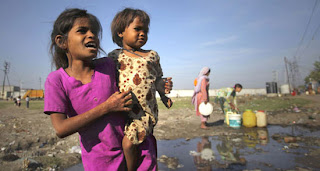 The Obama administration on Wednesday pushed oil giants BP Plc to agree a $20 billion fund to pay damages for a massive oil spill in the Gulf of Mexico that has threatened fishing and tourism and killed birds and marine life.

That fund has ignited calls in India for Washington to show similar accountability for U.S. firm Union Carbide. Its Indian factory in Bhopal leaked a poisonous gas 26 years ago, killing 3,500 people.

Activists say 25,000 people died in the immediate aftermath and ensuing years. Former chairman of Union Carbide, Warren Anderson, who lives in the United States, has been classified as an absconder in the case by an Indian court.

The first convictions in the disaster came this month, a quarter century late, partly due to India's slow-moving justice system. The verdict -- 2 years jail and small fines for Union Carbide's seven Indian employees -- has sparked outrage in India.


Activists of Bhopal Group for Information and Action (BGIA) said on Thursday while BP Plc was made to set up a damage claims fund within two months of the oil spill, victims of the Bhopal disaster have had no "real justice". 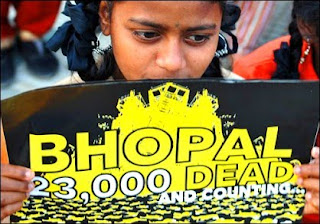 "You (Obama) hold the corporate accountable in your country but why is it that you are not holding American companies responsible for what they do abroad?" BGIA's Rachna Dhingra said.
"If this is not double standards, what is?" she told Reuters.
Activists have called on the Obama administration to ensure more compensation for the victims and cleanup of the Bhopal site.

Dow Chemical(DOW.N: Quote, Profile, Research), which owns Union Carbide, denies any responsibility saying it bought the company a decade after Union Carbide had settled its liabilities with the Indian government in 1989 by paying $470 million for the victims.

Activists and health workers say 100,000 people who were exposed to the gas continue to suffer today. 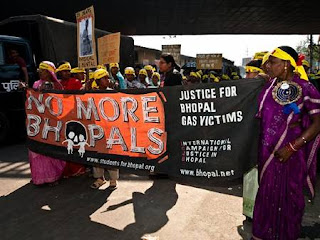 "My only request to the U.S. government is that as they are learning from their pain, they should share that pain and understand the pain of other countries," Sunita Narain, head of New Delhi-based Centre for Science and Environment said.

While the "very light punishment" in the Bhopal case has become a lightning rod for calls to reform the country's judicial system, it has also led to calls to inquire into how Anderson was able to leave India and charges of political conspiracy.

India's Congress party, which heads the ruling coalition, faces potential embarrassment in the case as the party was in power when the accident happened.

In the light of public outrage after the verdict, the government has set up a ministerial panel to look into issues of compensation, justice and pursuing the extradition of Anderson.
Posted by Next Year Country