A Nunavut government review board has turned aside objections from Inuit leaders and environmental groups and recommended the territory give the green light to seismic tests to search for oil and gas in the eastern Arctic. 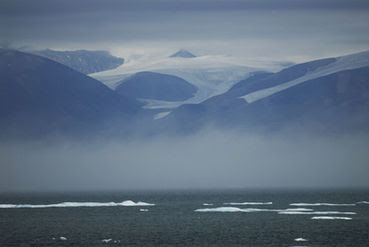 PAUL WATSON/TORONTO STAR
A noisy search for oil should go ahead in the eastern Arctic’s Lancaster Sound despite objections the seismic tests will endanger sealife in the proposed marine park, a Nunavut review panel says.

The federal Geological Survey of Canada plans to use powerful blasts from underwater air guns, towed by a German research vessel, to look for oil and natural gas fields at the eastern entrance to the Northwest Passage this summer.

Part of the survey area is in Nunavut, whose government review board has turned aside objections from Inuit leaders and environmental groups and recommended the territory give the green light to the seismic tests.

Lined by magnificent cliffs up to 400 meters high, Lancaster Sound is a pristine waterway rich in marine life, including 30 species of fish. It is a summer home for most of the world’s narwhal and a third of North America’s belugas.

Endangered bowhead whales share the sound with walrus and ringed, bearded, and harp seals. Its shores are nesting grounds for roughly a third of eastern Canada’s seabird colonies.

Although the geological survey’s proposed seismic tests would use sounds waves, not drills, to detect oil under the seabed, Inuit hunters and southern environmentalists are worried that 600 hours of air gun blasts could put marine mammals at risk.

Fired at one-minute internals, the air gun shots could damage the sensitive hearing and sonar navigation of whales, belugas and other sea mammals, or disrupt their migratory patterns, Christopher Debicki, Nunavut projects director for the environmental group Oceans North, warned the review board.

But the panel dismissed those concerns, including unanimous opposition from Inuit mayors and hunters in hamlets near the proposed survey sites in Lancaster and Jones Sounds, and Baffin Bay.

The review board “strongly encouraged” Geological Survey of Canada officials to meet again with residents of the hamlets for consultations before the seismic tests go ahead.

“It appears that there has been a lack of coordination between Geological Survey of Canada and other federal government departments when designing and communicating this project proposal,” NIRB chair Lucassie Arragutainaq wrote in the board’s May 21 decision.

“Also, public concerns have been communicated regarding the lack of meaningful consultation with potentially affected communities and miscommunication regarding the late provision of project information during the screening process.”

The panel also suggested “that all air gun start-up procedures include a ‘soft start/ramping up” period’” and that the guns stay silent if marine mammals or colonies of seabirds are spotted within a “full 1,000 meter safety zone.”

Nunavut’s Environment Minister Daniel Shewchuk can either grant the geological survey a license to proceed or send the proposal back to the NIRB for further review. Shewchuk did not respond to requests for comment Wednesday.

The disaster unfolding in the Gulf of Mexico, where BP’s deep sea well has been spewing plumes of crude for more than a month, has fueled fears that Arctic drilling could turn one of the last pristine places on Earth into a toxic wasteland.

Environment Minister Jim Prentice, who is also the minister responsible for Parks Canada, insists Ottawa will not allow a catastrophe like BP’s blowout off the southern U.S. coast to happen in the Canadian Arctic.

Finding out what resources lie beneath the seabed is just a normal step before Lancaster Sound can be protected as a National Marine Conservation Area, which would then be off bounds to oil and gas drilling, he said.

“I have no information to indicate that the seismic testing which is being contemplated would represent a threat to wildlife in any way, or to living life in the oceans,” he told the Star from Ottawa Wednesday. “There’s no indication of that.”

“I think, quite appropriately, we want to know the nature of the resources that are there for future planning, so that it’s clear to us,” Prentice said.

Drilling opponents warn that allowing rigs anywhere in Arctic waters would threaten the whole region. There is little disaster response equipment, or trained teams to use it, in the Arctic, one of the planet’s harshest, and most sensitive, environments.

Despite mounting public anger over the Gulf of Mexico oil disaster, U.S. President Barack Obama has refused to block Shell Oil’s plan to drill five exploratory wells in the Chukchi Sea and in the Beaufort Sea, off the Arctic National Wildlife Refuge.

“Certainly the Americans know our concerns and I think concern in the United States is obviously quite heightened as a result of what’s going in the Gulf also,” Prentice said.

Other, potentially more serious drilling risks loom in the eastern Arctic, where Greenland has accepted bids from oil companies to sink deep sea wells this summer in Baffin Bay, near Lancaster Sound.

Prentice said he will have “extensive discussions” about the planned drilling in meetings with Greenland and Danish officials during a summit of June 9 summit of Arctic nations in Ilullissat, Greenland.
Posted by Next Year Country