What does an erupting volcano in Iceland have to do with our future oil supply running out? 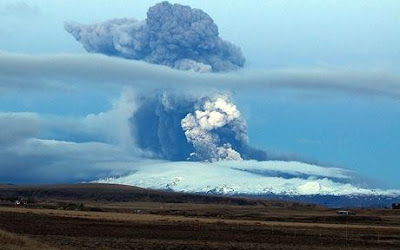 A lot, if you consider only the effect the recent grounding of planes all over the world has had on food supply. When oil runs out, as it will, food delivery will be drastically curtailed, and the disruption caused by the April 15 eruption of the Iceland volcano demonstrates just what this might mean. Airline won’t be back to normal until volcanic activity subsides, and in the meantime vegetables grown in Kenya are rotting; undelivered roses are being ground up for compost. Kenyan flower growers are losing $2 million a day.

Food producers have in Southern Spain have also been effected, as well as the electronics and pharmaceutical industries, who rely on overnight delivery for many of their products.

The UK Guardian published this article, April 19: Iceland volcano: Can fruit and vegetable shortages turn us on to local food?

‘But the food miles debate has a practical element to it that’s less often discussed. It really doesn’t take long for the efficiency of our global food distribution system to be found wanting. This is the system that we’ve become uber reliant on, that grew at the expense of our local food infrastructure. It can only be hoped that any shortages will boost the flourishing interest in localising our food system.


Those annoying, bandied-about terms like “local food” and “provenance” suddenly feel less like marketing buzzwords. Supporting local growers and small producers, becoming more self sufficient through campaigns like Hugh Fearnley-Whittingstall’s admirable Landshare project, initiatives like the Fife Diet, and making an effort to understand the produce we eat, the effort to get it to our table, to value it more and waste less – it all feels less like a smug lifestyle choice and more like common sense, doesn’t it?’

See also this article from The Telegraph: Volcano Chaos Could Continue for Months

The Icelandic volcano causing travel chaos across Europe could go on erupting for months, geologists have warned.
Posted by Next Year Country