Hard lesson in the Gulf of Mexico 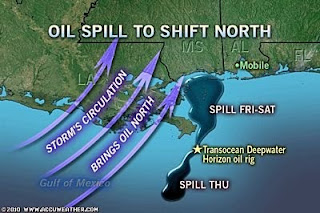 The disaster in the Gulf of Mexico is a terrible lesson in why society needs to move away from petroleum fuels. As a nation, Canada must continue to withstand pressure for oil tankers in British Columbian waters and keep relatively pristine areas such as Georges Bank and the Arctic free of oil and gas development.

"In our desperation to continue our inefficient use of fossil fuels, we have begun drilling in more remote areas, and the costs far outweigh the benefits to our economy," said Green Leader Elizabeth May.

The devastation from the spreading oil slick in the Gulf of Mexico will be widespread. Occurring during spawning and nesting season, countless fish and bird species will be decimated, as well as amphibians, marine mammals, sharks and turtles.

"What is happening to the Gulf Coast as a result of this oil spill is heartbreaking," said May. "The ecological and human costs are staggering-all due to our society's love affair with fossil fuels. It is a wake up call that we must start doing things differently-in terms of where we drill, the safety regulations around rigs, and most importantly, weaning ourselves off this energy source."

"It was Winston Churchill who coined the famous phrase 'The era of procrastination, of half-measures, of soothing and baffling expedients, of delays, is coming to its close. In its place we are entering a period of consequences'" said Green Natural Resources Critic Cathy MacLellan. "The scene that is playing out in the Gulf of Mexico is a consequence of our need to use the oil that is in the most remote places on the earth. Whether it is kilometres beneath the sea, or in the far North, oil companies with full backing of governments are allowed to minimize the dangers to workers and the planet's natural resources."

"Enbridge declares that 'oil transforms the economy'. This is certainly true and the transformation of the Louisiana economy due to this oil invasion in their fishing waters will be devastating. We do not want this repeated in our Arctic waters," continued MacLellan.
http://www.greenparty.ca/
Posted by Next Year Country