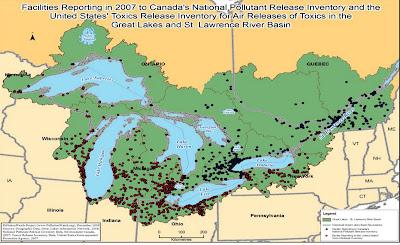 Canadian companies in the Great Lakes basin reported releasing almost three times more cancer-causing pollutants to the air (on a per facility basis) than companies in the United States, according to a report released today by CELA and Environmental Defence (under the PollutionWatch project) along with Great Lakes-area environmental groups from both sides of the border. A total of four million kilograms of known carcinogens were released to the basin airshed in 2007 by facilities in both countries.

The report relies on pollution data from Canada's National Pollutant Release Inventory (NPRI) and the US Toxic Release Inventory (TRI). The report also notes details of overall emissions to air, water and land. Despite huge volumes of pollution, total figures are less than ten percent of the true emission picture since only large facilities are required to report. Timed to coincide with the re-negotiation of the Great Lakes Water Quality Agreement, this new report underscores the need for greatly renewed attention to toxic pollution in the Great Lakes ecosystem. Highlights of the groups' recommendations include the need for governments in Canada and the US to quantify and annually report pollution loadings, to develop and implement a binational strategy to eliminate and reduce toxic chemicals, to expand and strengthen both national pollution monitoring programs and the role of the International Joint Commission (IJC).