The Path to Human Development 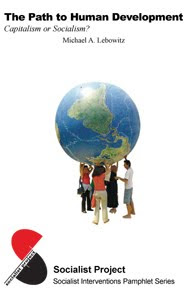 The financial and economic crisis currently enveloping the world market is causing an enormous amount of social chaos. Workers and families are being dislocated from their communities as factories and workplaces are shutdown. Immigrants already forced to migrate to find work are amongst the first laid-off and pushed into even more exposed social settings.

Women's work is becoming increasingly precarious, and the pressures on women to undertake unpaid care work increasing. A vulnerable planet is under greater pressures as measures to improve the world's ecology are sacrificed to the need to restore corporate profits. As Mike Lebowitz notes in the pamphlet below, the logic of capital is opposed to the logic of human development. In an economic crisis, all is sacrificed to the restoration of capitalist profitability.

A new anti-capitalist movement is emerging. This is renewing the popularity of the writings of Karl Marx, and in particular his penetrating analysis in Capital, still the foremost analysis of why capitalist development inevitably leads to economic crises. The ideas of socialism are re-gaining popular resonance. New study groups and activist campaigns are growing daily. The Path to Human Development: Capitalism or Socialism? is a significant contribution to these efforts. Read it. Study it. Debate it. Circulate it among friends and comrades. Take part in the anti-capitalist movement that is emerging across the world. Alternatives to financial greed, economic chaos and barbarism are not only possible, they have taken on an urgency.

Read The Path to Human Development here.
Posted by Next Year Country