by Christine
350 or Bust 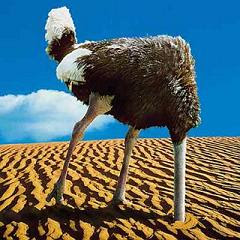 "The Harper government has taken a pause in financing federal action on climate change.

In his budget speech Thursday, Finance Minister Jim Flaherty was literally silent on the issue – climate change was not mentioned, though the government has in the past described it as one of the major challenges of the age.

Rather than provide new spending for programs to reduce Canada’s greenhouse-gas emissions, the government is standing pat as it prepares to regulate emission reductions in transportation, electricity and industrial sectors."

“Just when we thought that it couldn’t get any worse, today’s budget is a monumental failure of this government to do what it takes to address climate change in a meaningful way.

We are falling behind in the race for the clean energy jobs of the 21st century; the U.S. continues to outspend us embarrassingly 14:1 per capita on renewable energy. We have also failed to commit to our fair share in supporting poorer countries as they adapt to climate change."

Tim Weis, Director of Renewable Energy and Efficiency Policy at the Calgary-based Pembina Institute, points out on his renewable energy blog that in this budget Canada has hit rock bottom on investments in the environment. The resulting lag in innovation and green jobs will haunt Canada in the years to come:

"Yesterday’s Speech from the Throne committed Canada to becoming a “leader in green job creation”, but today’s budget does not walk the talk. With the Federal renewable energy investment program officially out of money, this budget’s void effectively means the federal government is walking away from renewable power. In spite of studies that have shown investments in renewable power actually generate a net financial gain for the government, it appears that this government still believes that taking action to protect the environment is at odds with building a strong economy. (In fact, Pembina’s analysis shows that we can take strong action to address climate change while growing our economy and creating nearly two million net new jobs.) "

Perhaps that perception is in part why Canada ranked 14th out of 17 countries for innovation, according to a recent report card from the Conference Board of Canada. Without strong federal leadership, Canadians will continue to lag behind as other countries take the lead in the emerging clean-energy market. (The U.S., for instance, set aside $98 billion for environmental and sustainable energy projects in last year’s economic stimulus package, outspending Canada 14:1 )

It seems that Harper’s Conservatives are leading Canada on a charge to nowhere but down economically and environmentally. The writing is on the wall - the carbon economy is the past, not the future. Former World Bank Chief Economist Lord Stern has estimated that to keep heat-trapping greenhouse gas emissions below levels that would cause catastrophic climate change would cost up to two per cent of global GDP. Lord Stern initially predicted that failure to act on climate change could cost from five to 20 per cent of global GDP, but recently revised that, saying the cost of inaction would be “50 per cent or more higher” than his previous highest estimate – meaning it could cost a third of the world’s wealth.

As scientist Richard Gammon, speaking on the steps of the U.S. Congress in 1999 said:

"If you think mitigated climate change is expensive, try unmitigated." 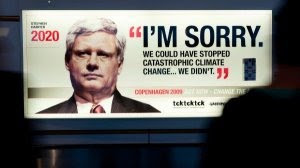 If you haven’t already contacted your Member of Parliament as well as Prime Minister Stephen Harper and Minister of the Environment Jim Prentice, do so now. Tell them it’s time for the Conservatives to get their heads out of the oil sands and take decisive action on climate change.

Click here and here to find out what else you can do to fight climate change.
Posted by Next Year Country