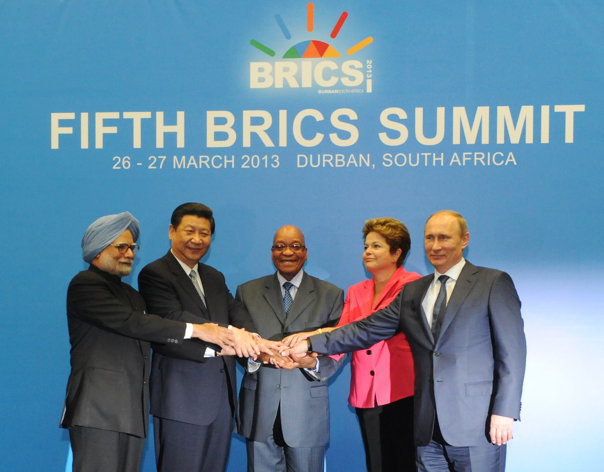 The BRICS are surpassing the US and the EU in terms of emissions of greenhouse gases. The Durban summit was an opportune moment to ask and answer many questions regarding the BRICS’ economic strategies and to radically reduce their levels of emissions.

As they met in Durban on March 26-27, leaders of the BRICS countries – Brazil, Russia, India, China and South Africa – must own up: they have been emitting prolific levels of greenhouse gases, far higher than the US or the EU in absolute terms and as a ratio of GDP (though less per person). How they address this crisis could make the difference between life and death for hundreds of millions of people this century.

South Africa’s example is not encouraging. First, the Pretoria national government and its Eskom parastatal electricity generator have recently increased South Africa’s already extremely high emissions levels, on behalf of the country’s ‘Minerals-Energy Complex’. This problem is well known in part because of the failed civil society campaigns against the world’s third and fourth largest coal-fired power plants (Eskom’s Medupi and Kusile), whose financing in 2010 included the largest-ever World Bank project loan and whose subcontractor includes the ruling party’s investment arm in a blatant multi-billion rand conflict of interest.

Other climate campaigns have made little dent against the guzzling mining and smelting industries which chew up South Africa’s coal-fired electricity and export the profits. The same is true for the high-polluting industries of the other BRICS countries, even in China where environmental protests are rising and where it is unsafe to breathe Beijing air on the majority of days so far this year.

How bad are the BRICS? The 2012 Columbia and Yale University Environmental Performance Index showed that four of the five states (not Brazil) have been decimating their – and the earth’s – ecology at the most rapid rate of any group of countries, with Russia and South Africa near the bottom of world stewardship rankings.[1] And China, South Africa and India have declining scores on greenhouse gas emissions, according to the EPI.

While BRICS fossil fuel addiction is well known, less understood is how their heads of states consistently sabotage global climate talks hosted by the United Nations Framework Convention on Climate Change (UNFCCC) by effectively destroying the Kyoto Protocol – in everything but name – starting with the Copenhagen Accord in 2009, picking up the pace with the Durban Platform in 2011, and sealing the deal in 2012 with Russia’s formal withdrawal from Kyoto.

In 2009, the ‘BASIC’ (Brazil, South Africa, India, China) countries’ leadership joined with Washington to confirm climate catastrophe at the 15th Conference of the Parties (COP) to the UNFCCC in Denmark. The Copenhagen Accord between Jacob Zuma, Barack Obama, Lula da Silva, Wen Jiabao and Manmohan Singh foiled the UN global strategy of mandatory emissions cuts, thus confirming that at least 4 degrees global warming will occur this century. The Accord is officially non-binding, and in exchange, the Green Climate Fund that Obama promised would provide $100 billion annually has simply not been forthcoming in an era of austerity.

‘They broke the UN,’ concluded Bill McKibben from the advocacy movement 350.org.[2] Copenhagen was what Naomi Klein called ‘nothing more than a grubby pact between the world’s biggest emitters: I’ll pretend that you are doing something about climate change if you pretend that I am too. Deal? Deal.’[3]

A secondary objective of the Copenhagen deal – aside from avoiding emissions cuts the world so desperately requires – was to maintain a modicum of confidence in carbon markets. Especially after the 2008 financial meltdown and rapid decline of European Union Emissions Trading Scheme, BASIC leaders felt renewed desperation to prop up the ‘Clean Development Mechanism’ (CDM), the Third World’s version of carbon trading.[4] Questioning the West’s banker-centric climate strategy – which critics term ‘the privatisation of the air’ – was not an option for BRICS elites, given their likeminded neoliberal orientation.

By the end of 2012, the BRICS no longer qualified to receive direct CDM funds,[5] so efforts shifted towards subsidies for new internal carbon markets, especially in Brazil and China. In February 2013, South African finance minister Pravin Gordhan also announced that as part of a carbon tax, Pretoria would also allow corporations to offset 40 percent of their emissions cuts via carbon markets.

The best way to understand this flirtation with emissions trading is within the broader context of economic power, for it is based on the faith that financiers can solve the world’s most dangerous market externality – when in reality they cannot maintain their own markets. As sustainability scholars Steffen Böhm, Maria Ceci Misoczky and Sandra Moog argue, ‘the subimperialist drive has remained the same: while domestic capital continues to invest heavily in extractive and monocultural industries at home, it is increasingly searching for investment opportunities in other peripheral markets as well, precipitating processes of accumula¬tion by dispossession within their broader spheres of influence. This mode of development can be observed in many semi-peripheral nations, particularly in the BRICS.’[6]

For example, according to Böhm, Misoczky and Moog, ‘China’s extensive investment in African arable land and extractive industries in recent years has been well docu¬mented. What is perhaps less well recognized in the development literature, however, is the extent to which financing from carbon markets like the CDM is now being leveraged by elites from these BRICS countries, to help underwrite these forms of subimperialist expansion.’

In terms of global-scale climate negotiations, the Washington+BASIC negotiators can thus explicitly act on behalf of their fossil fuel and extractive industries to slow emission-reduction obligations, but with a financial-sector back-up, in the event a global climate regime does appear in 2020, as agreed at the Durban COP17. Similar cozy ties between Pretoria politicians, London-based mining houses, Johannesburg ‘Black Economic Empowerment’ tycoons and sweetheart trade unions were subsequently exposed at Marikana, the site of a massacre of 34 Lonmin platinum workers in August 2012.

Other BRICS countries have similar power configurations, and in Russia’s case it led to a formal withdrawal from the Kyoto Protocol’s second commitment period (2012-2020) in spite of huge ‘hot air’ benefits the country would have earned in carbon markets as a result of the industrial economy’s disastrous exposure to world capitalism during the early 1990s. That economic crash cut Russian emissions far below 1990 Soviet Union levels during the first (2005-2012) commitment period. But given the 2008-13 crash of carbon markets – where the hot air benefits would have earlier been realised as €33/tonne benefits but by early 2013 fell to below €3/tonne – Moscow’s calculation was to promote its own oil and gas industries helter-skelter, and hence binding emissions cuts were not in Russia’s interests, no matter that 2010-11 climate-related droughts and wildfires raised the price of wheat to extreme levels and did tens of billions of dollars of damage.

The same pro-corporate calculations are being made in the four other BRICS, although their leaders occasionally postured about the need for larger northern industrial country emissions cuts. However, the crucial processes in which UN climate regulatory language was hammered out climaxed at the COP17 in Durban in December 2011 in a revealing manner. ‘The Durban Platform was promising because of what it did not say,’ bragged US State Department adviser Trevor Houser to the New York Times. ‘There is no mention of historic responsibility or per capita emissions. There is no mention of economic development as the priority for developing countries. There is no mention of a difference between developed and developing country action.’[7]

The COP17 deal squashed poor countries’ ability to defend against climate disaster. With South African foreign minister Maite Nkoana-Mashabane chairing, the climate summit confirmed this century’s climate-related deaths of what will be more than 180 million Africans, according to Christian Aid. Already 400 000 people die each year from climate-related chaos due to catastrophes in agriculture, public health and ‘frankenstorms’.

BRICS MUST AGREE TO EMISSION CUTS

What, then, should be done about the BRICS? They have been given a ‘pass’ from many climate activists because on per capita and in historic terms, their industries and agriculture have not been nearly so guilty of greenhouse gas emissions as the rich Western countries. Most recently, the huge increase in emissions by China for the sake of manufacturing production is now understood to be associated with the deindustrialisation of the West: the ‘outsourcing’ of emissions. So emissions from the east coast of China should logically be attributed to Western consumers, in large part.

But the pass is over. Pablo Solon and Walden Bello of the Bangkok-based institute Focus on the Global South opened a debate in September 2012: ‘We should demand that China, India, Brazil and South Africa also agree to mandatory cuts without offsets, although of course, these should be lower than the Annex 1 countries, in line with the UNFCCC principles.’ For Solon and Bello, the problem is the BRICS’ ‘high-speed, consumption-dependent, and greenhouse gases-intensive growth paths.’[8]

The Durban summit is an opportune moment to ask and answer many questions regarding the BRICS’ economic strategies. With Zuma recently declaring his government ‘anti-imperialist’ on foreign policy,[9] it is appropriate to ask whether this is not merely another case of talk left so as to walk right, because on the most crucial long-term foreign policy of all, climate, BRICS appear distinctly sub-imperialist.