I Broke the Law to Defeat Climate Change


Editor's note: On May 5, 13 people were arrested on the railway in front of the White Rock Pier for blocking trains loaded with American coal from reaching port in Tsawwassen. It was the most dramatic act of civil disobedience against climate change yet in the Lower Mainland. This Friday, members of the "White Rock 13" will lead a public discussion on whether nonviolent civil disobedience is needed to increase the pressure for action on climate change. J.B. MacKinnon, co-author of The 100-Mile Diet, gets that conversation rolling for The Tyee with arrestee Lynne Quarmby, who is also chair of Molecular Biology and Biochemistry at Simon Fraser University. 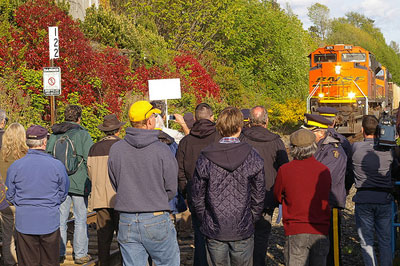 J.B. MacKinnon: Lynne, are you now, or have you ever been, a "professional activist"?

Lynne Quarmby: Never. After grad school in the early '80s I did participate in the big peace rally on the Burrard Street Bridge, with 100,000 people. And at various times in my life, I've been a big letter writer -- I've written dozens of letters to politicians. So I've been politically aware -- sort of an activist, but not a protester.

JM: And when did you first hear about the plans to block coal trains in Whiterock?

LQ: One week ahead of time.

JM: So you kind of jumped into this protest business with both feet.

LQ: I definitely did. One of the long-term issues I've been involved with is women in science, and because of that I'm pretty tuned in to science policy, and I'd been working hard in the usual political channels to raise some red flags about what Harper's been doing to science funding. On the other side, I am an environmentally inclined person -- I'm reluctant to say an "environmentalist," because people automatically put you in a slot -- so when Harper started impacting science on the environment, I really got upset, and when I saw the White Rock blockade information come up on my Facebook page, I just said, "Yeah, I'm there."

JM: Did you go to White Rock expecting to be arrested?

LQ: I was unbelievably naïve about civil disobedience, but showed up with the intent to get arrested, because that's what I thought was needed to get people to pay attention to this issue. I got online and thought, "Okay, what might this involve?" So I had four water bottles in my backpack in case there was tear gas, and a couple handkerchiefs to cover my face. I had no idea how much work had been done to make the blockade happen logistically.

JM: And how did getting arrested actually play out for you?

JM: From the media we've become so used to seeing protesters getting arrested that it's easy to see it as a big game, without serious consequences. Was that true in any way for you?

LQ: It was a heavy, heavy decision. Even though the timeline was very short, I devoted an enormous amount of effort to information gathering. So for example, I was fully aware that I was risking my ability to enter the United States. That would have impacted me in two very big ways. Career-wise, I get invited to give a lot of talks, to attend a lot of conferences -- an important part of my career is regular trips to the United States. Second, my son is a dual citizen -- he had just had a job interview in L.A., so there was a real chance that he would be living in the U.S. The issue of whether I had to spend a weekend in jail or have to pay a big fine -- I wasn't even going to think about that. But those longer term, bigger risks? I had a couple of long conversations with my son, and he was so supportive. He just said, "We'll come visit you. And if we have kids and you can't come visit, I'll just be so proud of why you can't come visit, and they will be, too."

JM: In the end, did you feel any repercussions?

LQ: Really mixed responses among friends and family. There are some people who roll their eyes and think of me as a bit flaky or foolish for doing this. I have a friend in my book club who I sat down with, and after explaining all of my reasons for the actions I've taken, her response was, "Well, maybe what's happening with the climate is as bad as you say, but as long as the Chinese are putting x number of new cars on the road each year, I just don't see the point in me doing anything." It's so demoralizing.

JM: I think that's a common barrier for many people who might otherwise consider taking action against climate change -- the sense that this is a global issue, with larger machineries at work than can be affected at the local level.

LQ: My ultimate response is to say, "Well then, we've got two choices. Either we all just give up and ride to hell in a hand basket, or we do what we can and hope that maybe, with people around the world doing what they can, something will change. At the very least, I will know that I didn't just give up. It's true, we live in this amazing place, and it's possible that we may be the last people to directly feel any consequences. But can you really enjoy walking on the seawall, knowing that because of our inaction, we are contributing to the droughts and floods and famine? How can I not do something?

JM: That takes me back to the arrests at White Rock Pier, which is such a public place. Standing on the sidelines there, I had the sense that a minority of onlookers were silently supporting the blockade, and then a whole lot of people were rolling their eyes and making sarcastic comments and just wondering why on earth anyone would do something like this.

LQ: That's exactly right. I had two experiences that come to mind. I'm the chair of my department, and I'm really busy, so I had a stack of work I had to do and I brought some of it to the blockade. And I was sitting there, working, and this guy walked by and looked at me and said, "Get a job." That was pretty awesome. And then at the end, when I was standing at the top of the stairs with a cop holding my arms, this woman came out of the crowd, and she was crying, and she gave me a hug and said, "Thank you." So that was a really moving moment.

JM: So you will be one of the arrestees sharing your story at Vancouver Central Library on Friday evening. Who do you hope you'll be speaking to?

LQ: I hope I will be speaking to people who are beginning to recognize that while there are many, many causes in the world, this particular cause really needs all of our attention right now, or none of the others will matter. And I'm starting to see more of those kinds of people all around me every day.

JM: Many people associate nonviolent civil disobedience with Gandhi in India or the U.S. civil rights movement -- situations where the people who broke the law were suffering day-to-day, personal harms. In Canada, the movement against climate change has to depend on people who are, for the most part, living relatively comfortable lives. Does that create any cognitive dissonance?

LQ: There are many different examples where civil disobedience has inspired big shifts in society. One that comes to mind for me is the movement to abolish slavery. The abolitionists were not the people who were directly suffering -- in fact, many of them were the beneficiaries of slavery. And there were a lot of people in England at that time who thought the economy would be devastated forever and we would all face living in poverty and grass huts if we didn't have slavery. Today I think there's something that keeps people from acting, because they feel like ending our reliance on fossil fuels means that we can all only ride bicycles -- heaven forbid! -- or that our quality of life will go down.

But when I look forward, it feels like if we don't do something drastic, our quality of life is going to go way down, way fast, because there's going to be war and strife and not enough food, and it's just going to be mayhem.

Whereas if we actually take action, if we stop building fossil fuel infrastructure and we go green and all that, my vision of that future is so much more appealing than the alternate future.

Join Lynne Quarmby and other arrestees from the White Rock blockade for "Civil Disobedience in a Changing Climate," a public discussion this Friday, Sept. 21, at the Central Branch of the Vancouver Public Library.