SFU geographer Kirsten Zickfeld notes in a new paper she has co-authored that northern hemisphere dwellers will suffer more severe effects of climate change than others. 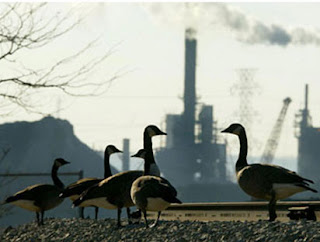 Even if zero emissions of greenhouse gases were to be achieved, the world’s temperature would continue to rise by about a quarter of a degree over a decade. That’s a best-case scenario, according to a paper co-written by a Simon Fraser University researcher.

“Let’s be honest, it’s totally unrealistic to believe that we can stop all emissions now,” says Kirsten Zickfeld, an assistant professor of geography at SFU. “Even with aggressive greenhouse gas mitigation, it will be a challenge to keep the projected global rise in temperature under 2 degrees Celsius,” emphasizes Zickfeld.

The geographer wrote the paper with Damon Matthews, a University of Concordia associate professor at the Department of Geography, Planning and Environment.

The duo used an earth system climate model developed by the University of Victoria to study the impact of greenhouse gas and aerosol emissions on the world’s climate. The study was based on emission levels that are consistent with data from the 2007 report of the Intergovernmental Panel on Climate Change.

The removal of aerosols from the atmosphere would cause additional global warming in the short term, if all of those emissions were removed now. “The widespread presence of aerosols in the Earth’s atmosphere is effectively acting like a solar radiation blocking blanket right now,” explains Zickfeld.

“It’s preventing the Earth’s temperature from responding to the real effects of global warming. But once that aerosol-based blanket is removed the temperature will rise.”

Due to the emission of greenhouse gases, the world’s temperature has warmed by almost 1 ° C since the beginning of the industrial era. The study finds that elimination of all emissions would lead to an additional short-term warming by 0.25 to 0.5 degrees.

“One to 1.5 degrees of global warming may not seem like a great deal,” says Zickfeld. “But we need to realize that the warming would not be distributed equally over the globe, with mid to high latitude regions such as Canada, Alaska, northeastern Europe, Russia and northern China being most strongly affected.

“Our research shows that as a result of past emissions, a warming of at least 2 ° C will be unavoidable in those regions.”

During the warming period the Earth’s temperature would rise to roughly 1.3-Celsius degrees higher than it was at the beginning of the industrial era.

In the northern hemisphere that peak temperature would be closer to 2 degrees higher. The reason is that the warming is not distributed equally over the globe, and is amplified at high latitudes.

“Two degrees is pretty significant,” notes Zickfeld, “when you consider the global temperature was only five degrees colder than today’s during the ice age.”

A decrease in greenhouse gases with short atmospheric lifetimes, such as methane and nitrous oxide, will cause the planet to gradually cool off after the warming phase.

The atmospheric concentration of long-lived greenhouse gases such as carbon dioxide determines the world’s long-term temperature.

This study is also the first to quantify the extent to which past greenhouse gas and aerosol emissions will warm oceans, causing them to rise. Zickfeld and Matthews found emissions to date will lead to about a 25 centimeters sea level rise in 2200, and the sea level will continue to rise for several centuries after that date.

The study doesn’t analyse the impact of other factors, such as melting glaciers and ice sheets, on sea levels. These factors are expected to accelerate sea level rise further.
Posted by Next Year Country