Deep inside the verdant and sweltering vegetation of Nicaragua's Mosquito Coast, a specially trained army unit is waging a new kind of war against a new type of enemy. 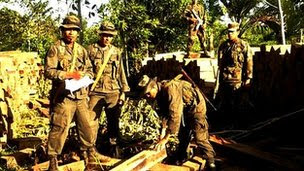 It is Central America's first concerted effort to seek a military-backed solution to the threats of climate change.

The trees were chopped down in Cerro Wawashang, a nature reserve that is being plundered to supply the black market for construction materials.

The eco-battalion, working in conjunction with state prosecutors and forestry officials, discovered the lumber contraband hidden under netting and brush to avoid detection from the air.

The troops are now reportedly on the trail of the criminal organisation that was extracting the wood from the jungle on riverboats.

"There are unscrupulous people who are taking advantage of the economic limitations of the people in this region.

"And in the end, it's the outsiders who benefit while the local communities are left with the indiscriminate deforestation," says Col Nestor Lopez, the army's chief of civil operations.

In a country with 71 nature reserves and other large areas of thick, primary forest, Nicaragua's precious hardwoods are tempting booty for timber traffickers.

Since 1983, Nicaragua's forest cover has dropped from 63% to some 40%, according to government data.

Not all Nicaragua's deforestation is caused by the lumber mafia - farmers and cattle ranchers are also doing their fair share of careless chopping.

But whoever is responsible, at the current rate of clearance only 25% of the country is likely to remain forested by 2030.

Reserves such as Cerro Wawashang will be reduced to scrub brush and grass, according to the military's projections.


As the forest cover recedes, the Nicaraguan government says climate change and global warming are already affecting the economy and national development.

"Since 2006, we are losing $200m (£126m) a year in lost agro-production due to climate change," says Dr Paul Oquist, who is President Daniel Ortega's adviser for national development policies and representative to world climate change forums.

"That's 9% of what's been planted each year. So our development in Nicaragua is already being affected by climate change."

Dr Oquist says deforestation and rising annual temperatures in Nicaragua - up three degrees centigrade in the past 50 years, according to government figures - is already affecting rain cycles.

Coffee farmers are having to move further up the mountains in search of cooler and shadier growing conditions.

And that would spell disaster for Nicaragua's economy.

So, he says, "Nicaragua is not waiting for the global community" to act on climate change.

Instead, the government is seeking its own national solutions to mitigate the effects of deforestation and global warming.

Part of that effort is the Ecological Battalion, deployed to protect natural resources as a matter of national security.

In addition to carrying guns, the green soldiers also carry shovels as part of a nationwide effort to plant 560,000 trees in the various national reserves that have been affected by deforestation.


The eco-warriors represent an interesting change in what small agricultural countries now consider as a threat to their national security.

Indeed, Article 750 of Nicaragua's Constitution reflects the important tie between conserving nature and conserving the peace.

"Any act or action that severely impacts the environment of the country will be a considered a threat to national security," the law reads.

The battalion's mission is also about ensuring future energy security.

Nicaragua is currently largely dependent on an oil-powered electricity but is attempting to move towards supplying more than 50% of its needs with hydropower.

"The Nicaraguan government is trying to change the matrix of its energy supply, and to do so we need to preserve and conserve our nature reserves and forests so we can have the water we need to run what will be Central America's largest hydroelectric plant, Tumarin," said Col Juan Ramon Morales.

"But if we don't have forests, we won't produce the rain we need to make this project sustainable. We can't have a hydroelectric plant in the desert."

The world is changing, he says, and the military must adapt to new and emerging threats.

The Ecological Battalion will work, he said, because it is in the army's nature to be green.

"We wear olive drab and camouflage," said Col Lopez. "Our colour is green by nature. Now we have to make it that by conscience, too.
Posted by Next Year Country