Another Future is Possible 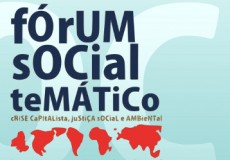 Working Paper that is a compilation of all the proposals taken from the texts produced by the Thematic Groups at the Thematic Social Forum of Porto Alegre (January 24-29, 2012). Bringing together the thematic groups under four core themes is a proposal for articulating the different themes. Some groups can of course be connected to two or more core themes.

Come to Reinvent the World at Rio+20

Rio+20 will be a strong political moment and a unique opportunity to “reinvent the world” by pointing to alternatives to the dangerous path in which we are currently ensnared. Nevertheless, judging from the actions of the hegemonic actors of the international system and from the mediocrity of international agreements negotiated in previous years, their false solutions, and the non-application of the principle already agreed upon at Rio 92, we understand that although we should not give up on our attempt to weigh upon their actions, neither should we feed illusions about our influence being strong enough to launch a virtuous circle of negotiations and meaningful compromises intended to deal with the serious problems that are threatening humankind and life on the planet.

We believe that the necessary agenda for global democratic governance presupposes the end of the current situation, in which the multilateral arenas have been taken over by corporative interests. Change will inexorably require action by the greatest possible representation of social actors: a broad variety of networks, non-governmental organizations, and different kinds of social movements, including environmentalists, farmers and urban workers, women, youth networks, popular movements, indigenous peoples, ethnic minorities facing discrimination, solidarity economy networks, etc. We must build a new paradigm of social, economic, and political organizations, whose actions will be enhanced by learning from the experiences of the ongoing struggles in these sectors and from knowing that we already have the material and technological conditions to establish the new forms of production, consumption, and political organization that we need.

Is Rio+20 an opportunity?

The second phase of the capitalist economic crisis in progress—currently centered in Europe, but extending to all the core countries—is generating the perverse social effects of the severe recession triggered in 2008. At the same time, continued growth in China and other developing countries is requiring more and more natural resources. Both processes are having a brutal impact on the global environmental crisis and together, are producing increasingly punitive social inequalities and leading to new humanitarian crises. All of this requires urgent responses, and there is not a government that can provide them. All of this requires a major reform of the current economic, social, cultural, and political system—global capitalism and its institutions. All of this adds up to a crisis of civilization, and the fate of billions of human beings is tied up with it.

In the current global power structure, controlled by the vested interests of multinational corporations, the “developed” and “emerging” countries have no real intention to challenge the “business of development.” There has, however, been an enormous change in global geopolitics. Global capitalism now works at two speeds, where the dynamics of accumulation in the core countries are disconnected from the so-called emerging markets, posing new problems for social transformation.

On the one hand, rich countries are being affected by stagnation and the crisis, even though corporations have maintained their capital accumulation and market speculators have their profits guaranteed. At the same time, the majority of the populations are suffering austerity policies, massive unemployment, the rise of inequalities, and the strengthening of conservative political currents and right-wing policies, such as the racist Tea Party groups in the United States and the xenophobic groups in Europe

On the other hand, the major “emerging” countries continue to expand their economies in the framework of global capitalism. Exaltation of their growth, acclaimed by almost everyone, reveals complete ignorance of the problems lying ahead. The crisis in the “financial creativeness” of neoliberalism has stimulated the rebirth of developmentalism. Millions of people are improving their standards of living in Asia and Latin America, consuming a little more than they used to, but social inequality is also increasing almost everywhere. Economic growth is being accomplished with the escalation of its inherent contradictions: inequality and income concentration, over-exploitation and job insecurity, environmental degradation, concentration of land ownership, growth of slums, ever poorer social services. Nevertheless, the impact of the small improvements has been prevailing over the perception of these contradictions, and an “all is well” logic is obstructing the formation of a counter-hegemonic project.

As a result, three years after the deepest economic crises since 1929, three years after the rise in the prices of commodities and food due to speculation by financial giants, four years after the Intergovernmental Panel on Climate Change (IPCC) warned of the urgency of a transition to a low-carbon economy, all the problems have dragged on with no solution in perspective and with “business as usual” as the only concern of established powers. No lessons have been learned and no structural change has been made: instead, the impasses of this suicidal trend have only grown in numbers and in intensity.

Failing a different civilization paradigm to challenge it, the capitalist machine is continuing to move, as it always has, toward its usual goals with its usual approach: more growth, expansion of exports and imports, production and consumption of more industrial goods, and conception and use of ever more, increasingly sophisticated services targeted to higher and higher numbers of people. As hundreds of millions of people enter society of mass consumption and pursue the lifestyle exported by American capitalism as an ideal of happiness, they are demanding increasing amounts of flashy goods, manufactured according to the logic of planned obsolescence, private use, waste, and disposability. And they are consuming more and more resources: energy, raw materials, food, and environmental services. This kind of growth is feeding new and future crises—fuel, raw materials, and food crises—and accelerating greenhouse-gas emissions and global warming. The only thing the world of capital can come up with is delusional promises that technological innovations will solve the problems. And to make sure that nothing keeps the system from prospering, democracy is being corrupted by the power of money or, whenever necessary, simply suppressed.

Indignant citizens are rebelling in many parts of the world, but the dynamics of the anti-system forces are still very fragmented, heterogeneous, unequal, and disarticulated, between continents and countries of the same region. There has yet to be an alliance among them, an articulation joining the diversity into a great irreversible movement.

Despite the demoralizing negotiations expected at Rio+20 within the framework of the UN, the Conference offers a real and symbolic opportunity for civil society to meet, present their proposals, and organize their struggles. Moreover, they can present a new paradigm of the economy, society, and politics that can face and eventually defeat the serious problems accumulated during this crisis of civilization, a paradigm that can strengthen the movements opposed to the system and be reinforced and developed by them.

To present proposals for another future that will allow us to bypass the blind alley into which the capitalist crisis is pushing humankind and the planet in this early twenty-first century, we have organized the proposals into four core themes according to which we have assembled the work done by the different thematic groups.

3. Production, Distribution and Consumption: Access to Wealth, Common Goods, and Economies of Transition

Foundations for Biocivilization
Education in a World in Crisis
Knowledge, Science, and Technology

Right to Land and Territory
Territories and Native Peoples
Sustainable Cities
For the Right to Water as a Common Good
Health Is a Universal Right, Not a Source of Profit

3. Production, Distribution, and Consumption: Access to Wealth, Common Goods, and Economies of Transition

Finance and a Fair and Sustainable Solidarity Economy
The Green Economy: A new Phase of Capitalist Expansion
Energy Transition Is Urgent and Possible

The Commons: a Kaleidoscope of Social Practices for another Possible World
Civil Society Organizations and Social Movements
Governance and the Architecture of Power