Tropic of Chaos: Climate Change and the New Geography of Violence 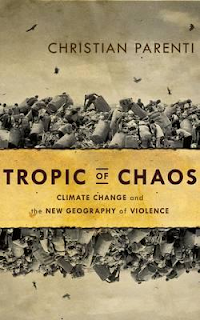 This sweeping narrative opens with the story of a single, ominous killing on the drought-stricken savannas of Northwest Kenya, a land where heavily armed pastoralists are fighting each other for water and cattle.

Moving outward from the iconic death of one man, Parenti takes us on a tour of the "tropic of chaos," a belt of restive post-colonial states that lie along the planet's mid latitudes and are suffering the brunt of the planet's rough weather. He takes us to embattled areas of Afghanistan, India, and Pakistan, vividly describing the way environmental changes have fueled violence and military conflict; he travels to the slums and deserts of Brazil and Mexico, where climate-driven rural crises are pushing people into the furnace of the urban drug wars; and he scopes out the increasingly militarized U.S. border, revealing how this unraveling world in the South is being met by the military of the Global North.

Combining historical research with on-the-ground reporting, Parenti shows how environmental crisis is colliding with the twin legacies of cold war militarism and unbridled free market economics to cause fragile nations to disintegrate into failed states. He also critiques the way the countries of the Global North have responded to this dangerous new world: rather than adapt by defusing tensions and embracing cleaner forms of energy, these governments are responding with greater repression, surveillance, and a program of permanent counterinsurgency.

Tropic of Chaos is a survey of a world in peril and an urgent call to action by one of our most intrepid and respected international journalists: those living in the privileged Global North must recognize that our own future is inextricably linked to the fate of the struggling nations of the Global South. Despite its bleak panorama, Tropic of Chaos ends with pragmatic suggestions for moving toward a more just and sustainable world.
Posted by Next Year Country