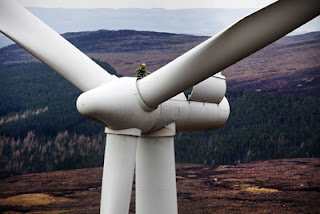 An Texan wind power firm is taking advantage of a NAFTA clause that lets companies sue the Canadian government if provinces do not comply with the agreement. Shawn McCarthy of the Globe and Mail explains why the Ontario Green Energy Act is being targeted, and what the Ontario Liberals are doing to defend it.

With the Dallas-based Mesa Power Group's action, the Liberal government is now fighting multi-front battles over its Green Energy Act and the feed-in tariff that pays renewable energy companies premium prices for electricity - so long as they procure a percentage of the goods and services in the province.

Ontario Conservative Leader Tim Hudak has vowed to kill the Green Energy Act if his party wins the October election, while Japan has challenged the act's local procurement rules at the World Trade Organization…"

For the complete article, please click HERE.
Posted by Next Year Country