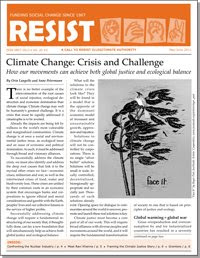 As movements around the planet mobilize to counter the effects of climate destabilization on their communities, cultures and ecosystems, a framing battle of global significance is underway.

In the climate fight, as with so many other struggles, the heart of the framing battle is naming the problem, since how we define the problem determines what solutions are possible. To varying degrees, governments and multinational corporations around the world have acknowledged the crisis and claim they are working to address it. However, they present the climate crisis through a reductionist lens as merely a problem of too much carbon in the atmosphere—while ignoring the underlying issues of justice, equity and humanity’s relationship with the Earth.

This framing allows exploitation of the crisis to justify escalating the very policies and practices that have pushed the planet to the brink. Essentially the world’s richest countries and companies are co-opting environmental rhetoric to put a PR-friendly “green” face on the same old politics of unlimited economic growth, resource thefts and corporate exploitation.

Meanwhile the “official” climate movement has been dominated by a loyal opposition of largely northern, policy and access-oriented NGOs who, although (mostly) well intentioned, have failed to reframe the debate or address the root causes of the crisis.

But increasingly, as more global movements begin to unite under the banner of climate justice, there is a different story to tell. The terms of the debate are being reframed from seeing the climate crisis as an isolated issue, to understanding the disruption of the climate as merely the most visible symptom of a much larger problem: our global system of growth-addicted, fossil fuel-driven, corporate capitalism that is undermining all the life support systems of the planet.

When this deeper framing of the problem is accepted it becomes clear that we will never restabilize the climate without addressing the roots of the problem. This means acknowledging the Global North’s historic responsibility for the problem (“climate debt”) as the first step towards fundamental shifts to our economy, political systems and cultural assumptions. This is why one of the overarching and unifying messages coming out of global movements fighting for a just response to the climate crisis is “system change NOT climate change.”

As people’s movements around the world ramp up their organizing there are a number of dangerous frames—control myths—that must be challenged.

Control Myth #1: Only the market can save us

In this case, a global carbon market effectively privatizes the atmosphere, justifies massive land grabs and further commodification of forests, soils and grasslands. Two hundred years of ideology have bestowed the “invisible hand” of the market with debate-shaping qualities of alleged efficiency, fairness and power. This is a familiar narrative to many of our movements fighting privatization and displacement, but we still need better, shared strategies to reframe the myth of the market.

Control Myth #2: Technology will save us

Hand in hand with the story of the all-powerful market is the obsession with techno-fixes, which masquerade as solutions but just distract us from making the fundamental changes that are needed. The assumption that some benign “experts” will provide new technology to solve the problem justifies continuing unsustainable policies while removing people’s agency. More and more climate techno-fixes are being proposed: from overt lies like “clean coal” to terrifyingly disruptive, untested new technologies like synthetic biology and geoengineering.

Control Myth #3: Only governments can save us

The debate has been overly focused on global and national policy while social movements and community-based responses are left out of the frame. Many mainstream environmentalists have even argued that any global emission reduction agreement (regardless of how weak or unfair) is better than no deal. Variations of this narrative have been used (particularly by the US) to evade historic responsibility and blame China, India and other developing economies for blocking an international deal. Certainly a global agreement is important, but the reality of the scale of the climate crisis is that we need transformative action in all sectors of society.

Given the wide-ranging implications of the debate, climate is an essential arena for our movements to develop more holistic narratives and shared frames that mutually reinforce efforts across different sectors and struggles. At the heart of this framing battle is the emerging climate justice movement led by frontline impacted communities, indigenous movements and environmental justice organizers.

Climate justice framing challenges the control myths above (and many more) by refocusing the issue on the core problems of fossil fuel addiction, the ongoing legacy of historic inequities and the need for systemic change. At the center of the evolving narrative is the role of community-based solutions in stewarding a just transition towards a society that is both sustainable and just.

With the historic adoption of the Cochabamba People’s Agreement on Climate Change and the Rights of Mother Earth in April 2010 there is now a powerful new narrative emerging that unites ecology, justice and social movement action. This platform offers a potent counterpoint to the corporate-driven, false solutions of the United Nations process. Most importantly it offers an invitation to organizers everywhere to connect their issues with this multifaceted struggle to transform our world. In the words of one of the key slogans uniting movements in the lead-up to the 2010 United Nations Climate Change Conference meeting and beyond: “Grassroots organizing cools the planet!”

Patrick Reinsborough has been involved in campaigns for peace, the environment and social justice for nearly 20 years. He co-founded the smartMeme strategy & training project in 2002 and provides grassroots partners with support on strategy, messaging and capacity building. This is an excerpt of an article that originally appeared on the smartMeme blog.
Posted by Next Year Country