Fears over spills, environmental impact spur concerns on both sides of border 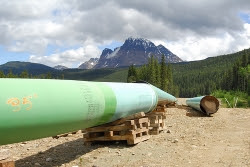 VANCOUVER—First Nations and environmental representatives from Canada are ratcheting up the pressure against the oil sands by taking their campaigning to the United States. In late May, a delegation headed to Washington, DC, to lobby against the proposed Keystone XL pipeline expansion and future impacts on the environment and their communities.

The controversial project would funnel over a million barrels of oil sands bitumen each day from Northern Alberta down to the Gulf of Mexico and has caused concern over pipeline safety and environmental and land rights issues that have yet to be addressed.

“Many were intrigued that we were there. They don’t get a chance to hear from First Nations on this side of the border too often. There are a number of concerns we have with this project. Firstly there is no cohesive long-term plan on how to proceed with the Alberta oil sands. It’s really the ‘old west’ in Alberta when it comes to natural resources and downstream communities are negatively affected by this development,” said Assembly of First Nations Regional Chief for the North West Territories Bill Erasmus.

“We want to see sustainable development of this resource as well as having the downstream impacts addressed. Canada needs a strong climate change policy and right now there is no plan," he said. "We are not saying no to development, we need to take a step back, see what is truly transpiring and develop a better approach.”

Upon invitation from the US Congress and the Obama administration, Erasmus, Chief Roxanne Marcel from the Mikisew Cree First Nation and representatives from the Pembina Institute, Climate Action Network Canada and Environmental Defense Canada stated where they stood on the project.

The delegation met Assistant Secretary of Ocean and Environment Dr. Karri-Ann Jones, members from the Department of Energy, the Environmental Protection Agency, members of the media and several congressmen.

The proposed Keystone XL pipeline by Calgary-based TransCanada Corporation would build upon existing pipeline infrastructure that transports Alberta oil sands bitumen to refineries in the US.

Keystone pipeline infrastructure currently sends 590,000 barrels per day (bpd) from Hardisty, Alberta to refineries in Illinois, Nebraska and Oklahoma over the 3,467-kilometre trek.

The XL would add another 2,673 kilometres of added pipeline infrastructure that will cross Indigenous lands in Alberta, Saskatchewan and the United States.

Keystone has said the XL pipeline will move 700,000 bpd from Canada and US receipt points through Steele City, NB, to Cushing, OK, and down to refineries on the Gulf Coast.

About 200,000 bpd of the payload will be delivered into Cushing and the remaining 500,000 bpd will be transported to refineries on the Gulf Coast.

Keystone has said their presidential permit application is requesting authority to transport up to 900,000 bpd, up from their initial capacity of 700,000 bpd.

The 6,140 km XL project would be over four times longer than the Trans Alaskan pipeline, and TransCanada has compared the undertaking to the construction of the Pyramids of Giza.

For Obama and other Americans the debate is on safety, energy security and vying for access to Canadian reserves while considering Asian and other international market competition.

Republicans are pressuring the Obama administration to approve the project before the end of 2011.

Only in operation for about a year, the Keystone pipeline has already had numerous reported spills.

Discussions of the XL expansion impacts come as TransCanada continues to clean up two recent spills in Kansas and North Dakota.

Keystone was shut down on May 9, 2011, after a spill in Bismarck, North Dakota where 21,000 gallons of oil leaked from a valve failure at a pumping station, and again May 29 after a small spill in Kansas.

A formal investigation has been set up by the North Dakota Public Service Commission into how the spill occurred and if TransCanada acted appropriately.

These chemicals have been associated with type 2 diabetes, cancers of the bile duct, liver and urinary tract and skin and vascular diseases.

Industry and government sources suggest tailings pond leakage into soil, groundwater and surface water are insignificant despite reports in 2003 that found leakage rates were at 11 million litres per day.

The Alberta government, industry-funded Regional Aquatics Monitoring System has been widely criticized for using “questionable statistical methods and assumptions,” and for the “lack of details of methods, failure to describe rationales for program changes, examples of inappropriate statistical analysis and unsupported conclusions and inadequate monitoring sites.”

With no clear long term sustainable vision or plan for the oil sands, the Keystone pipeline expansion would allow for unabated increased production in Northern Alberta without considering present issues associated with the development.

Erasmus said he and other First Nations have taken their concerns to provincial and federal governments north of the border, including requesting independent environmental monitoring, but they have been all but ignored.

“To date the federal and provincial governments have not taken the concerns seriously of impacted First Nations,” said Erasmus. “They claim there is no proof the oil sands are adversely effecting communities. The project is seen as being in Canada’s national interest and that it must go ahead.”

The UN Declaration on the Rights of Indigenous Peoples states that Indigenous communities must have free, prior and informed consent before any projects like the Keystone XL get the go-ahead.

The US State Department has opted to hold a new round of public consultation hearings into the XL expansion in six different locations throughout impacted areas, after they release a final environmental impact statement on the project.

A decision is expected near the end of 2011.

Keystone refused to be interviewed for this article.

Trevor Kehoe is a journalist originally from Calgary, now based in Vancouver.
Posted by Next Year Country

Email ThisBlogThis!Share to TwitterShare to FacebookShare to Pinterest
Labels: oil and gas