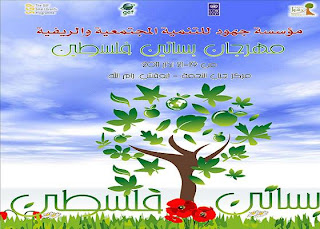 Despite being under occupation, Ramallah grows and thrives. Part of this progress includes caring for the environment. The city’s mission states: “We want the city of Ramallah to be beautiful, green, safe, clean, and environmentally friendly for the sake of all its residents, a city with a distinguished architectural style that preserves its cultural heritage and a city that believes in intellectual, social, and political pluralism.”

The Ramallah Municipal Council takes seriously its responsibility to ensure that Ramallah become a green city.

“Ramallah is a central city. It is the centre of the Palestinian Authority. It is an economic centre, a medical centre, an educational centre,” explained Mayor Janet Michael.

Global and local issues shape the Ramallah Municipality’s environmental policies. The effects of global warming are of great concern, and efforts to counter those effects are of great importance to the city. The Municipality aims to improve the environment by planting more greenery, protecting current greenery, instituting clean-up programmes, and carrying out awareness campaigns to educate city dwellers on the importance of taking care of the environment.

“We are aware of the environmental impacts on people’s lives. We want to create a healthy city. We want to reduce noise pollution, air pollution, and the dust from construction,” explained Sami Ewaida, head of the Ramallah Municipality City Beautification Section.

The makings of a green city

During the last three years, the Municipality planted nearly 14,000 trees in the city to compensate for the increased construction of new buildings. Members of the community helped to decide where the trees should be planted, and school children helped in the planting process. The Municipality also has its own greenhouse, where plants are grown before being transported to the city streets and gardens.

The Municipality’s strategic plan includes the development of green space in the city in the form of parks. Two types of parks will be developed: neighbourhood and major parks. They will include the Garden of Nations, a garden intended to be an open-air theatre for concerts and plays; Kamal Ajlouni Park, a children’s playground; Yousef Qaddura Park; the Mahmoud Darwish Garden (the site where the famous poet is buried), containing a museum, a multipurpose hall, and a public garden; and the 3.5-acre Al-Jahir Garden. This list is not exhaustive, as the Municipality plans to fill the city with greenery. The aim is to consider the environment and the beautification of the city simultaneously.

Cleaning up the city

The Municipality, in an effort to clean up the streets of Ramallah, instituted the Clean 24/7 Program, which required the purchase of additional city garbage trucks and a street sweeper. In addition, officials expanded the number of dumpsters and trash receptacles across the city. Cleaning and garbage crews work seven days a week.

The regional dumping site that will serve the Ramallah and Al-Bireh governorate is expected to be completed in 2014. Mayor Michael said that the project, funded by the German bank KFW, will cost around 10.6 million Euros. There are plans to build a treatment plant near Betunia to collect the sewage in the area. The Al-Tireh area currently has no sewage network, but the first phase in the project has been completed, and work on the second phase has begun. Soon the area will be connected to a sewage system, and the quality of life will be improved.

Laws to protect the environment

As part of its efforts to improve the environment and the quality of life in the city, the Ramallah Municipal Council revived and activated two laws already in the books that aim to protect the greenery. The first law requires landowners in Ramallah to use 10 percent of their land toward planting greenery. The second law prevents residents from cutting down trees without the appropriate permission of the Municipality. Ewaida said recently that a landowner cut down a 40-year-old tree. The Municipality discovered this offense and the landowner was sent a citation and ordered to plant a tree in place of the one cut down, he explained.

The city also issues citations to those stores and individuals not disposing of their garbage in an appropriate manner. Ewaida explained that these laws can be very effective in protecting the greenery, but it will require more municipal workers who can follow up to ensure that landowners are in compliance. He would like to see workers added to the city beautification team to handle the increasing demands of the city’s efforts to be environmentally conscious. Currently there are about 12 workers who deal with all the greenery in the city, but as more laws are enacted and more greenery planted, further follow-up is needed.


Educating youth on being green

Malvena Al-Jamal added that it is not enough to provide environmental improvements; there is also a need for education in order to develop a comprehensive plan to create a healthy and environmentally friendly city. “We cannot have a clean city without the cooperation of the residents of the city,” she explained. “The environmental circle includes infrastructure, rules, and awareness.”

Al-Jamal has focused on awareness projects in Ramallah’s schools. There is a full agenda of activities all year around. New programming begins with the new academic year in September and continues well into the summer with an environmental camp. Al-Jamal explained that the awareness-raising campaign consists of three objectives: educating first, second, and third graders about being environmentally friendly; promoting and helping to establish healthy and environmentally friendly schools; and organising the environment play contest.

Students work on projects to improve schools. Members of the Environmental Section visit schools to discuss with the students the environmental issues in their schools and the necessary changes and improvements that should be implemented as well as to help students come up with a work plan. Al-Jamal said that the Municipality provides the students with brochures and posters that describe methods that students can employ to improve the environment. In addition, students are given durable water bottles and bags to learn the concept of “reduce, reuse, and recycle,” Al-Jamal said.

Some of the student projects have included converting organic solid waste into compost, collecting money at schools for tree-planting campaigns, creating a drip-irrigation system for trees in order to conserve water, putting together plays that tackle the issue of caring for the planet, developing signs that alert those in the schools to turn off lights in rooms not in use, and organising cleaning campaigns in the schools and neighbourhoods.

The hope is that these awareness programmes will embed into the minds of the youth the importance of caring for the environment, Al-Jamal noted. “I believe you can change the attitudes of the school students, especially the younger ones, so that they adopt these behaviours and use them throughout their lives.”

To further expose children to habits of caring for the environment, the Municipality celebrates Earth Day in April and Tree Planting Day in January.

The future of Ramallah’s green movement

As the Municipality strives to position itself on the world map as major city, it will continue its efforts to make the region more green in order to improve the environment and living conditions by developing more green areas, expanding the sewage networks, expanding solid waste collection, and continuing the awareness efforts.

Al-Jamal would like to expand the awareness campaign to reach a wider audience that includes homemakers and city clubs. However, this requires more manpower and sophisticated tools, she added.

The city beautification section endeavours to provide more concentrated and professional work, which includes computerising data about the greenery for better tracking and follow-up. The computerised system will allow the city to keep track of the trees planted along the streets and in the squares to ensure appropriate follow-up.

The next several years will see dramatic changes in Ramallah’s greenery. In addition to the continued construction and renovation of public parks and public squares, the Municipality will remain focused on making schools environmentally friendly, cleaning up the city, creating a regional dump site, and providing each area with a sewage system.

“We hope to be more green, more open in the next five years,” said Mayor Michael. “I would like to see the residents be welcoming and more respectful of the open space as we continue our efforts to improve the environment and living conditions in the Municipality.”

Courtesy of the Public Relations Department of the Ramallah Municipality.

http://www.thisweekinpalestine.com/details.php?id=3449&ed=196&edid=196
Posted by Next Year Country