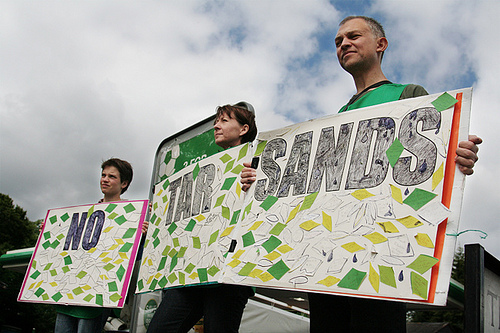 The Tar Sands, also known as the oil sands, are one of the largest remaining deposits of oil in the world, and efforts to extract the resource from a mix of clay and other materials underneath Canada’s Boreal forest have created the biggest, and by the accounts of numerous scientists and environmental groups,  the most environmentally devastating, energy project on earth.

TransCanada, one of the largest companies involved in tar sands exploration, has proposed a 1,661 mile, 36-inch extension of the newly built Keystone Pipeline from Alberta, Canada to oil refineries of the United States. This would expand the capacity for refining oil produced from Alberta tar sands by approximately one million barrels per day.

Time for the fight-back.

A group of leading environmental activists, many associated with the grassroots group 350.org, and many of them Nation writers, have issued a call and invitation for concerned citizens to take part in a campaign of non-violent direct action this summer in Washington, DC, in all likelihood, organizers say, during the last two weeks of August.

Why DC in the sweltering summer? That's when the State Department and the White House have to decide whether to grant a certificate of ‘national interest’ to some of the biggest fossil fuel players on earth, some of whom want to build the so-called ‘Keystone XL Pipeline’ from Canada’s tar sands to Texas's refineries.
The guidelines for participation are strict. Participants must pledge to:

1) Be utterly peaceful in all aspects of this action–physical and verbal.
2) Be dignified in dress and demeanor – these are serious issues, and we want to be taken seriously.
3) Attend an action training and briefing before I join the action. Knowingly and freely assume all risks, even if arising from the negligence of others, and assume full responsibility for my participation in this action.

Check out how to take part in the actions or otherwise support them and please post the letter to your social networks, forward it to your email list and talk about it with your friends and family. 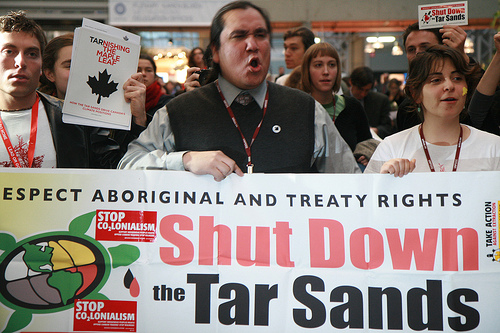