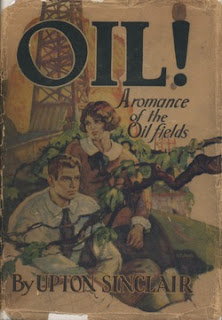 The great socialist Upton Sinclair left his literary legacy in the muckraking book The Jungle. However, most readers forgot Sinclair’s other masterpiece until the recent film adaptation, There Will Be Blood, shed light on this engrossing saga of greed, corruption and the love between father and son.

Oil! follows the patterns of Sinclair’s previous work, uncovering the injustices of American society. Sinclair uses the sharp and curious observations of Bunny Ross, son of the successful oilman J. Arnold Ross, to unfold the complexities and hypocrisies of the booming oil industry in the 1920s to 1940s.

In this volume published in 1927, Sinclair vividly describes the ambivalence of the 1920s in a style rivalling his famous 1920’s contemporary F. Scott Fitzgerald. Sinclair uses all the elements of the Roaring Twenties: driving and cars signalling freedom for youth, extravagant parties for the rich, and the rise of glamour in Hollywood. Set in California, the story captures the feelings and moods of the era.

The story slowly evolves to the major issues of the working class and the socialist movement of the 1930s. More importantly, Sinclair evokes major universal issues, particularly the difficult transition from adolescence to adulthood. First love, sexual awakening, and the college experience are all touched upon. As Bunny gains independence and develops his own world view, his relationship with his father experiences a nearly fatal shift.
﻿
﻿The brilliance of Oil! lies in the flowing narrative of corporate greed alongside the coming-of-age storyline. Sinclair writes in his signature muckraking language about unions, strikes and corrupt government officials. The story of Eli Watkins, the ambitious evangelist as seen in the film, provides added entertainment regarding the hypocrisy of organized religion. The Watkins family become the heroes of social justice with their endless and tragic fight for workers’ rights. Given the economic downturn and energy concerns in recent years, Oil! remains prevalent in society.

Those who enjoyed the film adaptation will find a varied storyline to the same issues. Sinclair uses his epic to critique the lack of corporate responsibility within the oil industry, the failure of politicians to protect citizens from economic exploitation, and the need of cohesiveness within the labor movement. The issues of the past continue to effect the present, and Sinclair’s Oil! adds to the discussion.

Originally published on Curled Up With A Good Book at www.curledup.com.