Climate Jobs and the Limits of Growth

One million climate jobs: solving the economic and environmental crises: a report by the Campaign Against Climate Change Trade Union Group (UK) 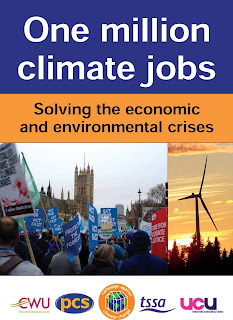 The Campaign Against Climate Change Trade Union Group (CaCCTU) has published a revised second edition of its “One million climate jobs” pamphlet. This is a response by a group of trade union and climate activists to challenge the multiple crises in a constructive way. The pamphlet which is aimed at activists is backed by serious research. It is informative about the sources of greenhouse gas emissions and issues around renewable energy based on wind, wave, tide, and solar power.
The campaign proposes creating a National Climate Service in Britain (NCS) which will hire one million public sector workers within 12 months in climate jobs producing renewable energy, renovating buildings, improving public transport infrastructure, industry, and education.
The ultimate aim is to cut emissions by 80% in 20 years. The action plan is dynamic and involves retraining the climate workers to convert Britain into a zero carbon economy.

The campaign insists that these jobs should be government jobs arguing that subsidies to encourage private industry will be inefficient, slow, and insufficient.

The financing of NCS is realistically discussed based on taxation measures with proposals including an extra 5% tax on the richest 1% of the population, a “Robin Hood” tax on financial transactions, closing tax loopholes, borrowing, and monetary expansion. One reference point is the bank bailouts of 2008-09, where massive amounts of funds were mobilised in a short time span to rescue private banks, which were “too big to fail”. If the “planet is too big to fail”, then mobilising £52billion/year for NCS should be feasible.

Further positive economic spill-over effects of NCS are shown rigorously: indirect and induced employment associated with climate jobs, a decrease in unemployment and thus lower benefit payments and higher tax revenues. This is predicted to save £34billion a year. Thus the report claims that NCS and one million climate jobs would only cost the government £18billion per year.

In the next stage, two related challenges are waiting the campaign, which are so far not addressed in either edition of the pamphlet. These are the rebound effects and the ecological limits to global growth and climate justice.

First, if the campaign achieves its aim of increased efficiency in renewable energy, this may radically reduce the share of expenditures in energy in the household budget. This is the rebound effect, which has been ignored in the pamphlet. This works as an increase in the real income of the households, and triggers additional expenditure in non-energy consumption, which again increases greenhouse gas emissions.

Second, we cannot seriously solve the problem of climate change unless we face the limits to global growth[1]: if the use of environmental resources is to maintain a certain ‘sustainable’ level, global economic growth in the long term, has to be zero or low, i.e. equal to the growth rate of ‘environmental productivity’. Furthermore, advanced capitalist countries like Britain need to de-grow (slow down) to create space for development in the Global South as part of a broader strategy of climate justice. This type of zero-growth or even de-growth, however, has nothing to do with the disastrous recession caused by the crisis. This is a managed zero-growth path in the long run that redistributes existing wealth in accordance with the needs of the majority. The latter aspect of redistribution distinguishes us from those ecological economists who are concerned only with limits to growth without sufficiently challenging unequal income and wealth distribution.

If we accept the scientifically well established ecological limits to growth we need to broaden the main aim of the campaign as “the reconciliation of decent work and life with zero growth and a low carbon economy”. This brings extra dimensions to the campaign in addition to NCS and climate jobs -so far the only focus of the campaign:

The first of these is creating more labour-intensive jobs in social services such as education, child care, nursing homes, health, community and social services. By increasing employment in these services we can create decent jobs for a lower rate of growth. The need for social services is not met under the present circumstances, where they are provided either at very low wages (to ensure an adequate profit) or as a luxury service for the upper classes or via invisible unpaid female labour within the gendered division of labour in the private sphere. Thus there is massive scope for new jobs.

Secondly, to maintain full employment without growth, a substantial shortening of working time in parallel with the historical growth in productivity is required. Reduction in weekly working hours should take place without loss of wages for the majority of the wage earners, which means an increase in hourly wages. Again this is not unrealistic: compared to the 19th century, we are all working part-time today. However, it does challenge the logic of profit maximization. The minimum wage should also be adjusted upwards to a living wage level. Similarly at the top of the wage distribution, a cap on top salaries and redistribution via radically progressive income taxes is required: this not only provides funds for NCS and social spending but also cuts conspicuous consumption and consumerism in a more equal society. Once conspicuous consumption is overcome and most of the socially desirable services such as child care, education, health care, housing, transport, communication are supplied as free or affordable and old age pensions and care are freed from market uncertainty the ideology and the illusion among working people of the need for growth and ever increasing incomes break down.