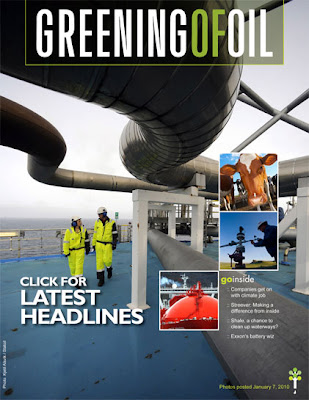 Natasha Peters and Padraic O'Brien, October 25, 2010, Ottawa - Members of Climate Justice Ottawa, dressed as Big Oil representatives hiding behind green masks, will be at the Chateau Laurier on October 25th at 5:30pm. They will be denouncing this new false dialogue as yet another attempted greenwashing tactic by the Canadian Association of Petroleum Producers (CAPP) to promote the Tar Sands as a sustainable source of energy.

On October 25th and 26th, CAPP, in collaboration with the Canada School of Energy and Environment, will be meeting in Ottawa with various hand-picked stakeholders to continue their “National Oil Sands dialogue”.

For years now, CAPP has been trying to hide the harsh realities of the Tar Sands by building a green facade. But behind this facade, the problems remain. “The bottom line is that the oil industry only seeks to expand its operations and maximize profit for its shareholders”, says Natasha Peters of Climate Justice Ottawa. Held in multiple cities across Canada, these CAPP led “false-dialogues” are part of a vast public relations campaign which includes billboards to falsely promote the Tar Sands as sustainable. Some of these can be found on the streets of Ottawa.

"The Tar Sands are not and will never be sustainable," Emelia Koberg, an organizer with Climate Justice Ottawa explains. “Immediate action is needed to address the climate crisis, stop the destruction of the land and respect the affected communities. An immediate moratorium on the Tar Sands must be implemented and this much needed change will not be lead by CAPP.”

Tar sands development is on track to destroy a section of Canada's boreal forest the size of England. The rapidly increasing carbon pollution from this mega-project and other global sources is fueling climate change, which already results in the deaths of an estimated 150,000 people each year and threatens upwards of 70% of the planet's species with extinction.

Climate Justice Ottawa, a group of concerned community members, is calling for the federal government to take serious action on climate change, to implement an immediate moratorium on tar sands expansion, and take the role of affected First Nations communities seriously in deciding the future of this megaproject.
Posted by Next Year Country