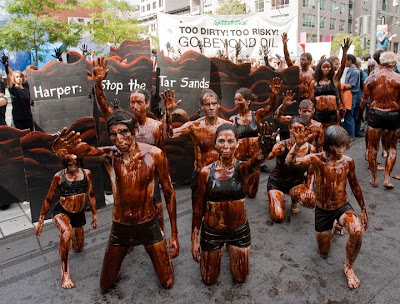 MONTREAL — Activists covered themselves in oil and rallied outside the Montreal Convention Centre as government officials met at the World Energy Congress Sunday.
About 60 Greenpeace activists staged a Black Tide Beach Party, and 12 people donned oil-covered bathing suits, to protest the use of oil and to advocate for renewable energy options.

As well, hundreds of people gathered outside the convention centre holding banners and signs that read, "Go beyond oil."

"Dirty energy is wreaking havoc all over the world, from the BP oil disaster in the Gulf of Mexico to the reckless expansion of drilling into fragile environments such as the Arctic, " Greenpeace International climate and energy campaigner Julien Vincent said in a release about the protest. "As the dirty energy industry descends on Montreal for the World Energy Congress, the message is clear: we desperately need an energy revolution, moving beyond oil and other dirty fuels to power our future with clean, renewable energy."

Protesters were calling on a global ban on new exploration in the Arctic for oil and gas.

The event participants also criticized the plans by Quebec Premier Jean Charest to allow exploration for oil and gas in the province.

"The Charest government must announce an immediate moratorium on exploration for oil and gas in Quebec," Greenpeace climate and energy campaigner Virginie Lambert-Ferry said.

The World Energy Congress opened in Montreal Sunday. The congress is held every three years and looks at global energy issues. More than 5,000 government officials from around the world are in Montreal for the four day congress
Posted by Next Year Country