New book: Toward Climate Justice: Perspectives on the Climate Crisis and Social Change


Toward Climate Justice: Perspectives on the Climate Crisis and Social Change
By Brian Tokar
From Communalism Press in Porsgrunn, Norway 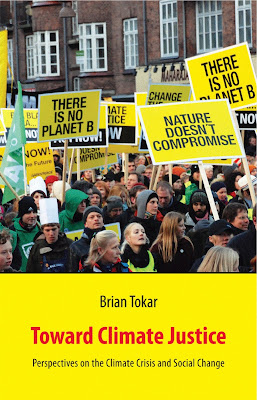 Brian Tokar is currently the director of the Institute for Social Ecology. He has worked in the antinuclear movement and organized resistance to biotechnology and genetic engineering, among other issues. His books include The Green Alternative and Earth for Sale. Tokar’s new book offers a radical perspective on the climate crisis and movements for social change.

Why have you written this book?

The debate over how to address the climate crisis appears stymied today in the US and around the world. While some are debating the intricacies of climate modeling and parts per million of CO2, weather patterns are in chaos, much of Pakistan is under water and the survival of land-based peoples worldwide is severely threatened. The climate crisis is a justice issue, and a profoundly political one, not an esoteric debate among scientists. My book aims to articulate this in a way that helps activists and concerned individuals find a way forward.

What are the general goals of the movements for climate action, and how do you think they should be developed?

To end the pollution that’s destabilizing the earth’s climate, we need to change the way we live, and how our economies and societies are organized. Many environmentalists now agree that carbon markets are a sham and that real solutions—dramatically reducing energy use to facilitate a rapid conversion to solar and wind-based renewables—challenge the limits of what’s possible under capitalism. To address this, we need a far more forward-looking and radical climate movement.

What can radical activists learn from movements for climate justice?

The climate crisis has the potential to help us reach beyond the historical divisions that separate various peoples and movements. We are all affected, but those who are most vulnerable are affected the most. The earth can simply no longer tolerate a global economy that enriches the few by destroying others’ means of survival. There is an opening now for a much higher level of solidarity and interdependence. More than ever before, our ability to thrive as a human species literally demands that.

What makes your book special? Why is it needed?

The book seeks to bring together, in one comprehensive and accessible volume, an analysis of the social justice dimensions of the present crisis, a critique of climate politics as currently practiced, and thoughts on how we can move beyond the despair of the present moment toward a more forward-looking, reconstructive outlook for the development of our movement and the transformation of society. It’s rooted in the holistic philosophical and political outlook of social ecology, which in my view offers the most promising framework for guiding our way forward.

Who do you hope will read your book?

I’d love to see this book spark discussions among activists, but also reach a wider spectrum of people who are concerned about the implications of the climate crisis and the long-range prospects for social movements. I hope it will be helpful for those who may be rooted in other progressive outlooks and may just beginning to ponder the broad implications of the climate crisis for humanity’s future.

The outlook of Climate Justice offers a renewed grassroots response to the climate crisis. This emerging movement is rooted in land-based and urban communities around the world that are already experiencing the impacts of global climate disruptions. Climate Justice highlights the social justice and human rights dimensions of the crisis, while challenging corporate-driven false solutions, and using creative direct action to press for real, systemic changes.

Toward Climate Justice explains the case for Climate Justice, challenges the myths underlying carbon markets and other false solutions, including the emergence of new nuclear and biofuel technologies. The book also dissects the events that shaped the diplomatic failure of the 2009 Copenhagen climate summit.

Drawing on more than three decades of political engagement with energy and climate issues, Brian Tokar shows how the perspective of social ecology can point the way toward a radically ecological reconstruction of society, in contrast to the grim, apocalyptic visions that underlie much of today’s popular climate activism.
____________________________

(editor of Communalism: A Social Ecology Journal)
Global Warming and the Struggle for Justice
Toward a Movement for Climate Justice
Beyond the Copenhagen Climate Summit
On Utopian Aspirations in the Climate Movement
Social Ecology and the Future of Ecological Movements
Posted by Next Year Country