Ideas for the Struggle

By Marta Harnecker
PDF of pamphlet from Socialist Project 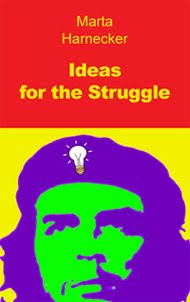 "What's happening is a renovation of left-wing thought. The ideas of revolutions that we used to defend in the 1970s and 1980s, in practice, have not materialized. So, left-wing thought has had to open itself up to new realities and search for new interpretations. It has had to develop more flexibility in order to understand that revolutionary processes, for example, can begin by simply winning administrative power.

One of the problems is reflected in the leadership of cadre, accustomed as they are to thinking: when we take office, we change. We are democratic while working in a movement, but when we take office, we become authoritarian. We don't understand that, in the society we want to build, the state has to promote protagonism of people, rather than supplant their decision making. It happens in some left-wing governments: government officials think that it's up to them to solve problems for people, rather than understand that they must solve problems together with people. If our government officials are to be wise, they must be pushed by popular initiatives so that the people can feel they are doing it themselves. The state's paternalism, in building socialism, may help at first, but we must create popular protagonism.

I insisted in 1999 that we use the term "political instrument" because "the party," in some cases, is a worn-out term. We were interested in creating an agency that is in accordance with the needs of the new society, rather than copying the schemas of already obsolete parties. The party, classically, has been a group of cadre who, at bottom, are seeking to prepare themselves for taking political office, winning elections, with methods of work that we copied from the Bolshevik Party, which were democratic, not clandestine. We mechanically translated that structure.

Link to Ideas for the Struggle pamphlet PDF HERE.
Posted by Next Year Country