From Earth’s Newsdesk and the Rainforest Portal, projects of Ecological Internet (EI)http://www.ecoearth.info/newsdesk
http://www.rainforestportal.org/ 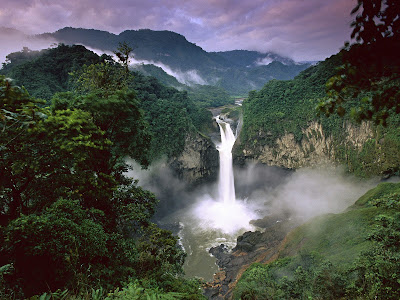 It is reported Ecuador will be compensated for leaving oil reserves in Yasuni National Park untouched. This is a major victory for Ecuador, the rainforest movement, and Ecological Internet – who was the first to campaign internationally on the issue.

Ecuador’s government announced today it has reached a deal with the United Nations Development Program under which donor countries will compensate Quito for leaving oil reserves untouched in a large primary rainforest filled national park. Yasuni National Park – covering some 9,820 km2, or about the size of Massachusetts – is thought to be one of Earth’s most biodiversity rich sites and is also home to several nomadic Indian tribes. Yasuni’s preservation (total protection, not “sustainable management” or “conservation”) would spare Earth some 410 million metric tons of carbon dioxide (CO2) emissions that contribute to global warming; while keeping biodiversity, ecosystems and cultures fully intact. The official signing is reported to be held on Tuesday.

Ecological Internet’s Earth Action Network [1] was the first to campaign internationally on threats to Yasuni from oil exploration, successfully internationalizing the issue. “This marvelous rainforest and climate victory is very gratifying and exciting,” states Dr. Glen Barry, Ecological Internet President. “Ecological Internet began to campaign in the early 2000s to protect Yasuni National Park from oil development, and continuously since. Like so many of our campaigns, it has just taken off. Our efforts were picked up by ‘The Ecologist’ Magazine, and since then a large local and global movement has been built – including the Yasuni-ITT Initiative, Scientists Concerned for Yasuni, Save America’s Forest and many other participants – who share in this victory.”

In 2007, Ecuador’s then President Rafael Correa launched the Yasuni-ITT Initiative, which sought compensation for agreeing to forgo exploiting the estimated 846 million barrels of crude in the Yasuni National Park. Negotiations had centered on the amount of compensation Ecuador would receive, with Correa insisting his nation get at least 3.5 billion dollars over ten years — about half the value of the estimated reserves in the protected area. When international donors were slow to respond, Ecological Internet launched another campaign which successfully “nudged” donor nations to fund this Yasuni-ITT proposal[2]. As of early this year, about half had been pledged, with Germany (910 million) and Spain (241.8 million) leading the group of donors that included France, Sweden and Switzerland.

Much of the remainder of the Western Amazon — home to some of the most biodiverse and intact primary rainforest ecosystems left on Earth, which are critical for driving regional and global ecosystems and climatic patterns necessary for life – are threatened with decimation by oil rigs and pipelines. Over 180 oil and gas “blocks” – covering some 688,000 km2 (170 million acres) of Bolivia, Colombia, Ecuador, Peru, and western Brazil (nearly the size of Texas) – areas zoned for exploration and development. This energy production is concentrated in the Amazon’s largest remaining un-fragmented primary rainforest wildernesses, containing the most species of birds, mammals, and amphibians.

“Destruction of primary rainforests for oil production and other industrial developments is a global ecological emergency. Regional governments, international donors and global citizens must decide whether every last bit of the Earth’s old forest wildernesses; and intact, large ecosystems which make Earth habitable, will be sacrificed to delay having to transition now to renewable energy sources. In the process, abrupt run-away climate change, mass extinction and social disintegration will be ensured. This deal, if indeed signed as reported on Tuesday, represents a major new model for achieving global ecological sustainability, which must be replicated wherever primary rainforests shroud oil reserves. Further, it sets the precedent that to truly be protected, primary rainforests must be fully preserved in an intact condition, and not ‘sustainably managed’, which is a myth,” explains Dr. Barry.
Posted by Next Year Country