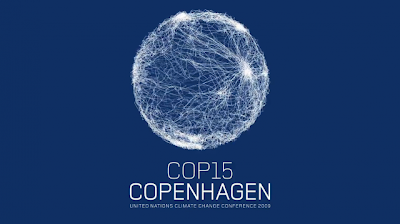 The fifteenth meeting of the Conference of Participants (COP15) in the Kyoto Protocol took place this month in Copenhagen, Denmark from December 7 to 18, 2009. The purpose of the conference was to wrap up more than two years of negotiations by representatives of all the world's governments to get a legally binding treaty for a new round of reductions in carbon emissions under the U.N.'s Kyoto Protocol to replace the first round which was expiring.

So what happened? The United States sabotaged the negotiations by refusing to agree to any legally binding treaty, by refusing to commit itself to any significant reduction of its own carbon pollution, and by refusing to work through the U.N.'s open and democratic negotiating process, instead maneuvering behind the scenes in secret to strike a deal with a few select countries which was then sprung on the conference at the last minute. Naturally, the negotiations collapsed and the conference ended in failure, except for the United States, which outcome is obviously what it had intended all along. To understand the significance and probable consequences of this event some background will be necessary.

Read this essay here.
Posted by Next Year Country