Are swimsuit specials a thoughtful, clever way of arousing interest in climate change? Or are they little more than sexist idiocy? 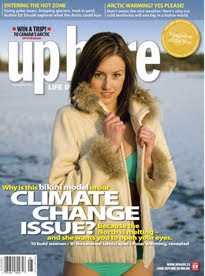 Up Here magazine: The July-August issue features 10 women posing in their swimwear in the Canadian wilderness to 'raise awareness' of climate change. Well, it got your attention, otherwise you wouldn't be reading this now. And that was precisely the point, claim the editors.

Up Here, a Canadian magazine focused on "northern culture, lifestyle, arts and travel", has produced a climate-change special this month featuring its first-ever swimsuit photo spread. Ten women are snapped in their swimwear posing in the Canadian wilderness. And it's all in the name of, er, raising awareness about the threat climate change presents to Canada's northern landscapes. The magazine explains its logic in the editor's introduction:

It wasn't long ago that you'd never see a bikini up north. But if our territories keep warming a degree per decade, swimsuits will one day replace parkas. What may be jarring now won't be jarring soon.

Speaking to the Canadian Broadcasting Corporation, Aaron Spitzer, Up Here's editor, added: "We are always, as communicators, striving to come up with some new way to grab people."

But Shannon Ripley of Ecology North, a Yellowknife-based environmental group, wondered why the swimsuit special failed to feature any men, before hinting that pictures of thinly dressed women might not, perhaps, be the best way to drum up serious interest in climate change:

It seems to me that it would also fit to have men — scantily clad men, or men in shorts and T-shirts or in less clothing — as well. Perhaps the reason I mention that is the whole issue of gender and using a woman's body to perhaps sell magazines or to draw attention to an issue.

And here's how Spitzer defended such accusations to MastheadOnline.com:

Response to the issue, which was released last week has been largely positive, says Spitzer. "The vast amount of comments have been supportive of the concept," he says. "They like it because we are being respectful of an issue we could have easily been accused of making fun of or lampooning in some way." Spitzer admits there has been some feedback saying the magazine is using a sexist tool to make light of the topic. "Some of the staff share those views," he says. "We really discussed it in-house before we went ahead with it." He says Up Here is aware and even encouraging some blow back, asking for feedback both on the magazine's website and Facebook page.

"I hope that even if people picked up the issue because of the bikini model on the front they will read it because there is some awesome writing in it," says Switzer. "A lot of great, challenging and interesting ideas."

Any editor's duty is to generate interest in their publication, so hats off to Spitzer for that, but Ripley surely has a point here. Is this what we now have to resort to? Using the lowest common denominator to arouse (I use that word advisedly) interest in the threat posed by climate change? (Yes, it would seem, if the previously discussed Miss Earth Girls is anything to go by.)

Tim Querengesser, a staffer at the magazine, has written a blog giving some more context to Up Here's decision for going ahead with its swimsuit special:

The inevitable has happened with our new July-August issue, which features two articles about climate change - one listing the mounting evidence that its impacts are being felt right now in the north, the other daring to explore why many Northerners actually like climate change. But no one has paid much attention to those. No, what's getting all the attention - just as we expected and intended - is our swimsuit spread.

When you want to get attention in a room full of people talking, you tend to yell. So, when we decided to dedicate an entire issue to climate change in the North, one of the most over-trammeled media narratives in history, we knew we'd have to yell to be heard above the already deafening howl.
An idea was born: Why not make the point the North is warming, fast, by putting people in swimsuits in Arctic landscapes? Why not, someone pointed out, take what Sports Illustrated does with its swimsuit edition and flip it on its head? It was a case of subversive gamesmanship, a classic detournment that would resonate both in the north and in the south, where we have a lot of readers and, one hopes, influence.

It's not as if this is unique, by the way. Back in December, when hundreds of world leaders and their entourages jumped on planes and therefore released a bunch of carbon to talk about climate change in Copenhagen, Canadian artists from Nunavik sculpted a polar bear made of ice to send a message about climate change threatening polar bears. As the bear melted, the point was elegantly made.

And that's what we intended to do with the swimsuit issue: Make a point. Like any bold move, it's open to interpretation and criticism. But that's the goal - to underline the North's unique predicament with climate change to readers who don't experience what it's like day in, day out, like we do up here.


Has Querengesser got a point? Or does this sort of stunt risk backfiring? (Not for the magazine, of course, but for the wider environmental cause.)

I could have chosen to ignore this story (and, more importantly, the pictures), but I do think it acts as a timely talking point in the ongoing debate about how best to communicate climate change and reach out to those who might not otherwise be interested. Mistakes, such as the wholly ill-advised "Jack and Jill" adverts put out by the Department of Energy and Climate Change last year, need to be discussed so that lessons can be learned. Does this swimsuit special fall into that category of communication cock-ups? Or is it inspired?

What's certainly not inspired is the decision to wrap one of the models in what appears to be a fur coat, as can be seen in one of the stills in this video:

This fails on two counts. First, it rather undermines the idea that the temperatures could soon be warm enough in the Canadian north to wear swimsuits. Second, animal fur and environmentalism have never been the cosiest of bedfellows, particularly in Canada where seal clubbing is all the rage in some quarters.

Sadly, Charlotte Overvold, one of the models involved, failed to dispel the stereotypes that haunt her industry when she was asked to comment on whether the photographs were "tastefully shot", and why she agreed to take part:

For me personally, animals, and the hunting and stuff like that, it's, like, greatly affected [by climate change]. So I felt very strong in being a part of this.
Posted by Next Year Country