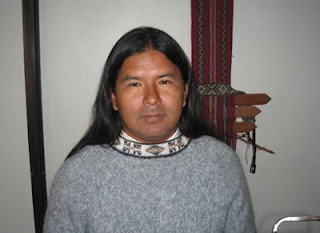 An Interview with Marlon Santi
Jeffery R. Webber
On July 5, I sat down with Marlon Santi, President of the Confederation of Indigenous Nationalities of Ecuador (CONAIE), in his office in Quito. We discussed the increasing contradictions between the demands of the indigenous movement, on the one hand, around water rights and anti-mining resistance, and the positions of the government of Rafael Correa, on the other, which has labelled indigenous resistance to large-scale mining and oil exploitation as “terrorism and sabotage.”

Can you describe you political formation and personal political trajectory?

Before becoming president of CONAIE I was from a very small indigenous community that is called Sarayaku. In this community, since about 1996, I was involved in the struggle against Chevron and other oil companies. In that period, we successfully drove these companies out of our territory. After that I was involved in organizing in my community at a very local level, not even at the provincial or regional levels. So, it's been a huge jump from being a representative in a community to a national representative of CONAIE.

Can you briefly describe the history of CONAIE, and your role today inside the organization?

CONAIE began to organize itself in the 1970s. It had to do so clandestinely, because in this period indigenous movements were considered allies of communism, and communism was seen as a threat by authorities throughout Latin America. By the 1980s CONAIE took its form as an indigenous movement.
Read more here.
Posted by Next Year Country