Learning from Socialists: Agroecology in Cuba 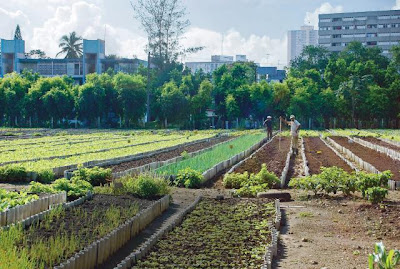 In 2006, my wife and I were fortunate to travel to Cuba with an international Agroecological delegation from Mexico, Venezuela, Mozambique, North Korea, Japan, Ireland and other countries, as well as the United States.

In the face of the collapse of the Soviet Union and the U. S. economic blockade, the Cubans were forced to move quickly during the 1990s "special period" into agroecological (versus petrochemical)approaches to raise food to feed the people. At the time of our trip, urban agriculture-using bio-fertilizers and bio-controls-provided more than 384,000 good paying jobs and 4 million tons of vegetables each year using only 67,000 hectares of land.
Read more here.
Posted by Next Year Country