The Oil Spill Disaster & Fundamental Flaws of the Overall System 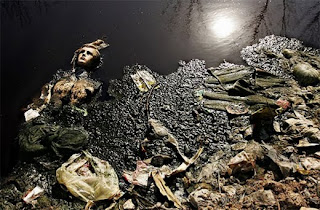 As many of my regular readers might suspect, I've been following the environmental disaster in the Gulf of Mexico rather closely. But a particular event related to that catastrophe really brought together my overall opinion of the whole mess. In an obscenely ludicrous turn of events, those applying to respond for the clean-up efforts on the gulf coast were subjected to drug tests and immigration raids! I was almost too furiously disgusted to guffaw.

But, frankly, maybe this potentially predictable event is just what was needed to allow us a chance to see the oil spill in a broader and more comprehensive context. As destructive, disruptive, and outright calamitous as this epic and growing oil spill has been... it's easy to forget or overlook the fact that humanity was already in and facing serious crisis. Even without our terminal addiction to oil (which is easily one of the most comprehensive and pressing issues) we still face issues which are often, at best, only incidentally related to petroleum extraction.

Let's take general consumerism, for example. It's only incidental that our toxic and disposable gadgets are made from petroleum-derived plastics. Widespread deforestation and dustbowls were already being manifested before the oil-powered era of the 20th century. The genocide of the Americas had already taken place, and species from the dodo to the humpback whale were already hunted to (or near) extinction. So the cultural drive to consume, quite literally, was already inculcated in many people around the world. And, hopefully, you can see how all these things could pose fundamental problems even before the advent of the oil age. If a "clean" energy source were implemented, a solar-powered bulldozer would still be destructive -- wind-powered computers would still generate e-waste.

Supposing that a substitute for oil was put into, or always had been, in place... we would still be faced with issues like the war on drugs, the prison-industrial complex, and brutality instituted by the state. And while certainly related on some levels, even in a relative environmental utopia we might still be faced with overwhelming issues of authoritarian oppression. So while I don't want to dismiss the social benefits that would undoubtedly arise from a clean environment, it needs to be pointed out that other issues, especially as they are related, need adequate attention.

As usual, we must make sure that we are not hacking at the branches on the ship of fools -- my favorite mixed metaphor.

Patriarchal Materialism and the Eco-Feminist Alternative

While some would ignorantly use the ideas for an equally unjust matriarchy or a personal attitude of petty payback, I think the ideas of eco-feminism are more relevant than most in the current discussion. The predominant culture, particularly in the west and the United States, looks at nature, and people, in a fundamentally shallow way -- and thus abuses them accordingly.

Definitions, while useful, are often abused by those who are more interested in rhetorical word games rather than what anyone is actually meaning to say -- nevertheless, I would suggest the problems facing humanity relate somehow to a concept of materialism. In short, I'd say our society is (and has been for some time) gluttonous, greedy, and impatient.

We are gluttonous and greedy in our rapacious appetites for nearly everything -- without adequate thoughts of what will remain or what the byproducts will be. I think this is fairly obvious overall when looking at western society. But this becomes even more of a problem when combined with our impatience.

Many assume the ignorance of our fellow creatures because we have not observed an intelligence which they, personally, can comprehend. Others seem not to understand that there are any consequences in changing a forest to a field and then to a parking lot. And so few seem to understand that simple observation can provide more knowledge and insight than any amount of dissection or experimentation.

Now I know that it may seem that I've gone off-topic in apparent tangents, but I remind the reader that this article is about the fundamental flaws in the system -- and I am trying to expose the proverbial root which may actually be worth striking.

The oil spill is a symptom, not a cause.

If it hasn't already, the oil spill in the gulf, as one of the biggest environmental disasters in history, should make us fundamentally question the system which manifested it. How many more such disasters can we tolerate? How much larger of a disaster can we tolerate? How likely is it that more and larger disasters will occur?

On a superficial level we can expect, at the very least, more pointed skepticism and intolerance for the indulgences of corporatism and it's governmental accomplices. BP, British Petroleum, which is directly responsible for the failed Horizon drilling platform in the Gulf of Mexico (and the subsequent disaster) was supposed to be the "green" and "eco-friendly" energy corporation. The U.S. government had entrusted BP with the primary official role in clean-up response before this disaster even occurred -- despite a record that made even the notorious Exxon seem safe and responsible by comparison.

If the American people and the people around the world didn't already have enough reasons to distrust the government and the corporations... now might be a good time to start fundamentally questioning any supposed social contracts that are supposed to keep we plebes safe. The disaster in the Gulf should not make us simply question just the BP corporation and the current actions of the government. People around the globe are being abused (and even killed) by corporations across the board -- and the government is imposing itself upon us in ways that greatly transcend it's incompetence in facilitating and handling the current disaster in the Gulf of Mexico.

When are we going to get serious?

To many without a grasp of history, the following plea may seem hackneyed, hyperbolic, and contrite, but... When are we going to revolt?! It should be becoming evermore clear that we need to be, literally, fighting for our lives.

The crisis is already real for the billion people who don't get enough food each day, for the billions toiling their lives away on the assembly lines, and for the tens of millions around the globe who are trapped in war-torn conditions. But even those outside of the most immediately dire circumstances are faced with the accumulating toxins of industrial society -- from irradiated water leaking out of nuclear plants to agricultural run-off; from greenhouse gas emissions to the oceanic garbage gyres, and now... to the BP oil spill in the Gulf of Mexico. And, as much as we may want to deny, underplay, or forget it... the powers-that-be are still holding over our heads the nuclear weapons which could, quite conceivably, destroy all human life on Earth.

Even if you are skeptical about personal survival in these conditions, or even about the survivability of humankind overall, simple dignity would seem to demand a serious response. I realize that homo sapien sapien is the most domesticated animal (and that neither cattle nor attack dogs have anything on us), but must we, as a whole, take the current existential crisis passively? Must we resign ourselves to either suffering or fiddling while Rome burns? Is there no hope or satisfaction in trying for a fundamental revolution of our social, economic, and environmental conditions?