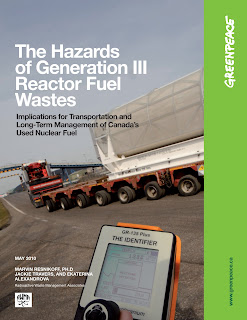 A Greenpeace report shows that newly designed reactors Ontario proposes to build at the Darlington nuclear facility would produce long-lived waste two to 158 times more radioactive than waste from existing reactors in Canada, increasing costs and dangers to health and the environment.

“Our report documents how the nuclear industry and governments are hiding the true costs of new reactors by turning a blind eye to the legacy of highly toxic waste they would produce,” said Shawn-Patrick Stensil, Greenpeace nuclear analyst.

The unassessed dangers are revealed in a report entitled The Hazards of Generation III Reactor Fuel Wastes by Dr. Marvin Resnikoff of Radioactive Waste Management Associates. Greenpeace commissioned the report as a result of federal and provincial governments willfully ignoring the increased dangers and costs of waste associated with new reactor designs by delaying all studies and consultations until after a decision is made to proceed with building new reactors at the Darlington station east of Toronto.

“It is the height of irresponsibility to ignore the increased hazards and costs of new, more toxic reactor waste. When governments allow such significant environmental costs to be ignored, Canadians rightly lose trust in the institutions meant to protect public health and the environment,” said Stensil.

A federal environmental assessment panel reviewing the potential impact of Ontario’s proposal has said that an agency controlled by the nuclear industry will examine the full impacts of new reactor waste at a later date. That panel, the Nuclear Waste Management Organization (NWMO), began looking for a community willing to bury the industry’s harmful and dangerous waste last month.

“Any communities being approached to bury the nuclear industry’s toxic legacy should be wary. There is no fail-proof way of storing radioactive waste forever. Canada built the current generation of reactors without a plan for managing radioactive waste and still does not have one. Now the same mistake is about to be repeated but with more toxic waste and more dangerous threats,” said Stensil.

The Greenpeace report explains how reactor designers have increased hazards by using a higher “burn up” rate for nuclear fuel to extract more energy from reactors in an attempt to reduce costs and make plants more competitive. This increases the hazards and costs of managing radioactive waste.

• The isolation period for waste from new generation reactors will increase to 2.3 million years from one million years before radioactivity approaches that of natural uranium;
• Environmental and human health consequences will significantly increase in severity if there is an accident or terrorist attack involving higher burn up nuclear fuel;
• More toxic fuel waste will increase costs of managing waste, including costs of interim storage, transportation and long-term storage in a repository; and
• Despite billions of dollars in research internationally, there is no technologically proven or universally acceptable long-term repository for fuel waste in operation anywhere in the world. The cost of repositories is speculative.