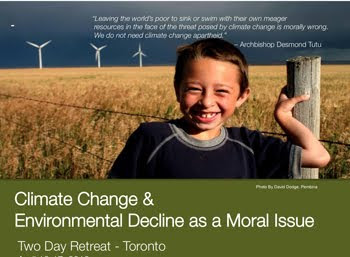 About fifty participants gathered in Toronto in mid April to explore Climate Change and Environmental Decline as a Moral Issue. The two-day retreat was organized by the University of Calgary faculty of social work and a group of Canadian faith-based, development and environment NGOs.

Dr. Mishka Lysack, assistant professor in the Faculty of Social Work at the University of Calgary, co-convener of the retreat, facilitated an exploration of the latest scientific issues surrounding the climate change challenge, the current political realities, and the emerging actions by faith-based communities to engage with climate change. In his opening remarks, Lysack reminded the participants that “climate change is about social justice on a planetary scale”.

The retreat allowed various religious groups to briefly present how they are taking action within their own communities and congregations at the grassroots, national and international level to address concerns about environmental decline. The United Church of Canada, the World Council of Churches, KAIROS, the Evangelical Fellowship of Canada, Redeemer College, A Rocha, and Ismaili Muslim, Buddhist and Baha’i Faiths were all represented. The exploration of how religious communities and religious voice can reach leaders of thought and politicians ran throughout the presentations.

Since the UN climate conference in Copenhagen, where world leaders failed to ratify a binding agreement on climate change, there has been a growing concern by many faith-based groups and congregations about their role in taking action to safeguard the planet. The Hon. David MacDonald, former Cabinet Minister and Member of Parliament, and part of the World Council of Churches delegation to Copenhagen addressed whether the Copenhagen conference was a failure saying: “This was a very historic event, because most if not all of the key players were there.” The event served to “get the world’s attention, to analyse diverse perspectives, and to recognize that dealing with climate change is not just about the science,” referring to the challenge of taking up the broader and deeper moral considerations.

Citing a recent study by Dr. David R. Boyd entitled Canada vs. the OECD: An Environmental Comparison, Claire Demerse, associate director of The Pembina Institute’s Climate Change Unit, shared that “Canada has one of the poorest environmental records of the industrialized countries.” The recent study shows that for the twenty-five environmental indicators examined, “Canada’s overall ranking among OECD nations is a dismal 28th out of 29.” She spoke about how words must be followed by action, likening the lack of demonstrated political will to address climate concerns as “someone who wants to lose weight but who keeps on eating potato chips.”

With regard to methods and approaches to address global climate change, a “new global consciousness is required,” said Duncan Hanks, a representative of the Baha’i Community of Canada. He added that “the challenge of climate change reminds us that we are one common humanity with one common future.” Referencing the Baha’i International Community’s statement entitled Seizing the Opportunity: Redefining the Challenge of Climate Change, Hanks stated that “The challenge before the world community is not only a technical one but a moral one, which calls for the transformation of thoughts and behaviours so as to allow our economic and social structures to extend the benefits of development to all people.”

Among the national strategies of faith-based communities to engage politicians on the subject of climate change is their participation leading up to and at the "2010 World Religions Summit: Interfaith Leaders in the G8 Nations", planned from 21-23 June 2010 at the University of Winnipeg. The 2010 Faith Leaders statement (Canada) specifically addresses concerns for climate justice and the need for inspired leadership in this regard.
Posted by Next Year Country