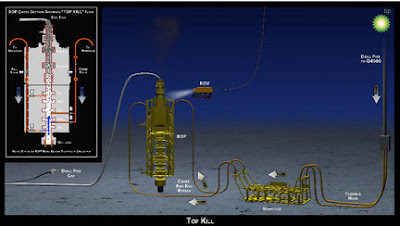 BP has abandoned its most recent “top kill” effort to contain its runaway oil well in the Gulf of Mexico, a company official announced Saturday evening.
"After three full days, we have been unable to overcome the flow," said the company's chief operating officer, Doug Suttles at a news conference in Robert, La. “. . . This scares everybody, the fact that we can’t make this well stop flowing, or the fact that we haven’t succeeded so far.”

In its next effort to halt what its officials have called an "environmental catastrophe," BP will cut off the leaking riser at the top of the five-story blowout preventer atop the wellhead to get an even surface on the broken pipe.

Then the company will install what’s called a lower marine riser package, a cap containment system that would be connected to a new riser from the drillship Discoverer Enterprise 5,000 feet above on the surface. The aim is to minimize the amount of oil reaching the shore until BP can drill relief wells, Suttles said.

He estimated that the procedure would take about four days to complete, but if it also fails, it could be several months before BP can finish drilling two relief wells to intersect the runaway well so concrete can be poured into it.

As much as 73 million more gallons of oil could contaminate the Gulf of Mexico if the flow continues unabated until August _ the soonest that officials estimate the relief wells can be drilled _ poisoning wildlife, destroying fragile marshlands, closing more fishing grounds and depriving fisherman, resort workers and many others of their livelihoods.

Scientists fear that the volume of oil, the depth of the leak and the chemical dispersants the company is using will combine to threaten a vast array of undersea life for years.

At risk are such endangered species as Kemp's ridley sea turtles and the Atlantic bluefin tuna, as well as the Gulf's 8,300 other creatures from plankton to birds. The contamination, some say, is likely to undo years of work that brought some wildlife, such as the brown pelican, back from the brink of extinction.

The economic impact on fisheries could be dire. On Friday, the National Oceanic and Atmospheric Administration closed additional areas of the Gulf to fishing, shutting off about 25 percent of federal waters to ensure that seafood from the Gulf remains safe for consumers.

Because of the closure, shrimpers in particular fear that they face what could be a years long, if not permanent, loss of market share to farm-raised shrimp from Southeast Asia.

Coast Guard Rear Adm. Mary Landry said officials were disappointed that the top kill method failed, but added that the Coast Guard and BP are still fighting to keep the oil from reaching the shoreline.

"It's a little bit of a roller coaster ride for everyone," she said. "Obviously, we've said we've had to prepare for a worst-case scenario from day one, that this could fail totally and release a tremendous amount more than it is releasing now."

After three days in which BP said it pumped more than 30,000 barrels of drilling lubricant known as mud into the runaway wells blowout preventer, BP engineers determined that it was time to try something else, Suttles said.

He said the decision was made in consultation with Interior Secretary Ken Salazar and Energy Secretary Steven Chu, a Nobel laureate in physics.

Engineers had hoped that the drilling mud pumped into the blowout preventer using the top kill method would block the crude oil and gas from spewing out of the damaged wellhead and blowout preventer.

However, from the beginning technicians said that most of the mud flowed right back out, along with the oil and natural gas. BP stopped pumping the mud for an extended period within hours after it began on Wednesday, and in the ensuing days, it also pumped debris into the blowout preventer in hopes of blocking leaks and allowing the mud to accumulate.

Those efforts failed, too.
Posted by Next Year Country