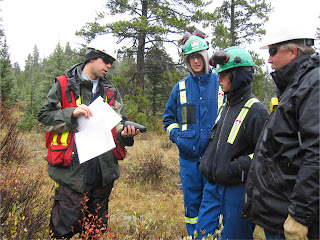 While our screens and newspapers bring us the latest news from the Gulf of Mexico showing us the mess that can come from oil extraction, we find ourselves asking about environmental guidelines and impact assessment processes. If the risks with a given development--in this case, offshore oil drilling--are high, how does the project get past the Environmental Impact Assessment? How is it that we allow this kind of oil development or the tar sands in Alberta?

The sad truth is that our official environmental assessment processes are not up to the task and, even as the oil gushes forth from this Deepwater leak, the regulations are under seige from industry and being watered down even further by their allies in government.

A biologist friend who recently found himself participating in a study that was part of the Environmental Impact Assessment for a development in native grassland told me off the record that he was ashamed to say that his report and study was "bad science." The terms and parameters of the study were kept to the minimum that is required under legislation, which meant that the data was not very meaningful as a way of determining the long-term affects of the development on species at risk. Why do it then, if he knew it was a sham? His answer was that if he didn't do the work, someone else would do an even shabbier job.

At the Prairie Conservation and Endangered Species Conference in Winnipeg, I heard Brad Stelfox say from the podium that he thinks the current EIA process is "disgusting." He too called it bad science and said that typically, the studies just look "over the shoulder" to compare the effect of any proposed project to yesterday. Change over such a short time frame increment will always seem minor, but if longer studies were done, the full impact of the development would be revealed.

But if biologists and conservationists don't like the EIA process, the oil and gas industry likes it even less. To a pipeline or oil company, the EIA process is a lot of unneccessary cost and paperwork slowing them down. You can see their logic. Our projects are almost never turned down or stopped and are seldom even re-routed to any significant degree, so why make us go through all of these regulatory hoops and pay for all of these studies? Sure, we have to look like we are considering environmental impacts, but can't we speed up the process of faking it?

In Saskatchewan, the Brad Wall government has been listening. They have promised to "streamline" the existing EIA processes and introduced some legislative changes, claiming to be following a new and better, "results-based regulatory system." This might sound good, but the only place I have seen anyone praise the new regulations was in a copy of "Pipeline News," an industry tabloid put out in Estevan. Check out page 2 of the January edition.

A couple of issues later, on page A5 the paper ran an editorial titled "Some rules are for the birds," written by the editor, Mr. Zinchuk. In it he ridicules the requirements for low noise levels in a bird sanctuary where the MacKenzie Valley Pipeline is slated to run and then reminisces about the good ol' days when you could get a project up and running real fast. Near the end he complains about construction guidelines here on the prairie:

"there is a regulation limiting construction during the summer – the prime time to be doing this sort of work. This is the regulation I came across, from a source would [sic] prefer not being named, but must work under these guidelines. 'No construction activities will occur within the migratory bird nesting period between May 1 and July 31 until such time as a bird breeding survey by a qualified avian biologist has occurred with recommendations for mitigating strategies that have been approved by Environment Canada." 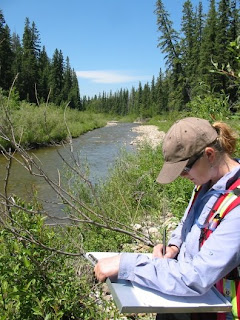 That’s ridiculous, but it makes sense when you realize that one of those major pipeline projects I worked on a decade ago, they rerouted the line around an owl’s nest and some protected grass, to a cost that was well into six figures. Now, they don’t even work at all until they figure the nests no longer have chicks in them."
Mr. Zinchuk does his best to make the regulations seem onerous, but the truth is, the pipeline or drilling facilities end up going where they want them to go most of the time, and on rare occasions when they have to move to avoid a nest site, the margins are always minimal and no one really finds out what the long term impacts are on the grassland or species at risk. The oil and gas industry is in general wreaking havoc on grassland and grassland birds by cutting up habitat with hundreds of roads, introducing invasive species that degrade the prairies, installing vertical structures that nesting birds avoid, creating ponds that incubate deadly West Nile virus-bearing mosquitoes, and bringing in noisy machines that mask the sounds of grouse and chase birds from the landscape. And all of this is being done under the current EIA system , with its supposedly stringent guidelines.

In my next posting I will talk about Stephen Harper's assault on the EIA process.
Posted by Next Year Country