The governing Conservative government members voted against the Bill but were outvoted by opposition MPs who form the majority - ESC. 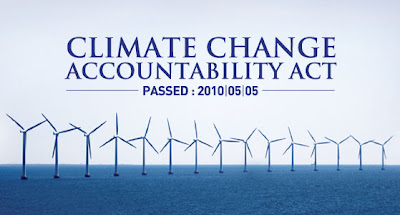 Today, the New Democrat Climate Change Accountability Act (Bill C-311) passed its final vote in the House of Commons by a vote of 149 to 136. Wed 05 May 2010
“It is a great day for Canada as we finally have a blueprint for greening our future,” said New Democrat Leader Jack Layton. “We would not be here without the thousands of Canadians who called and wrote to their Members of Parliament, pushing them to finally adopt meaningful climate-change legislation.”

“It’s been a lot of work with a lot of ups and downs,” said Bruce Hyer (Thunder Bay–Superior North), who introduced the bill in the House. “But finally Canada will be on its way to having clear regulations and frameworks for fighting climate change. We can at least hold our heads up high in the international community.”

C-311 is the country’s only federal climate-change legislation and will make the government accountable to Canadians for action on climate change through regular reporting on measures to achieve firm targets.