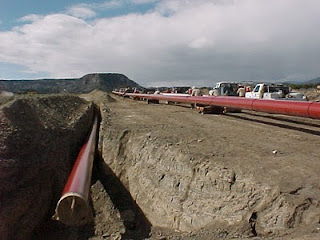 Last week I used this space to draw attention to the changes to environmental assessment that we are seeing in Saskatchewan. Things are worse on the federal level, where the big projects go for approval, the stuff that can really do a lot of damage: pipeline, mines, and offshore drilling.

Here is an article published in the Globe & Mail on March 31 this year. It appears that the Tories slipped these changes into parliament, as a way of getting around a Supreme court ruling. From the G & M article:

"The decision to rework environmental assessment requirements follows a Supreme Court ruling in January, where the top court decided that the federal government violated the law by conducting only a partial review of the Red Chris copper and gold mine, located in Northern British Columbia, and not an in-depth study of all the possible environmental impacts of the project.

Under the changes in the budget, Mr. Prentice [Environment minister] will have the ability to limit the scope of assessments at his discretion, legal changes that will allow him to sidestep the Supreme Court ruling, which had been sought by the Ecojustice group."

Let your MP know what you think of these changes. It is exactly this kind of pandering to industry that leads to both environmental catastrophe as we are seeing in the Gulf of Mexico and to the slow erosion of biodiversity in wild places.

The environmental assessment process is flawed to be sure, but to weaken it further will just make it that much easier for industry and commercial development to run roughshod over the last remnants of wildness we have in Canada.
Posted by Next Year Country