ENGOs Do Not Speak for Carrier Sekani Tribal Council 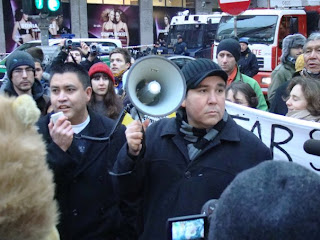 The Carrier Sekani Tribal Council is calling on all environmental non-governmental organizations (ENGOs) to improve their policies on working with First Nations communities, particularly CSTC communities that have unresolved land and resource claims in British Columbia, Canada.

At a minimum these ENGOs should be adhering to, supporting and promoting the United Nations Declaration on the Rights of Indigenous Peoples (UNDRIP), which sets an international minimum standards on how First Nations and indigenous people should be treated. This includes the free, prior and informed consent of our people to decide what happens in our territories.

Vice Tribal Chief Terry Teegee said, "Recently we've learned that the Nature Conservancy of Canada (NCC) accepted $2.5 million dollars from Enbridge to plant trees the company removes from its projects. This happened in spite of objections from First Nations to the Enbridge Gateway pipeline project. It is very concerning." Enbridge is currently proposing to build a twin pipeline through CSTC territory. Both inland and coastal First Nation have united to oppose the Enbridge Gateway pipeline project because the risks of oil spills are not worth a couple of jobs and some money.

"The oil that would flow through the pipeline is the dirtiest oil there is. It comes from the Alberta Tar Sands and is Canada's largest contributor to greenhouse gases," noted Teegee. He added, "It's ironic NCC would work tirelessly to conserve pristine places such as the Great Bear Rainforest and most recently in the Boreal Forest, and then take funds from a company that would put it at risk of destruction if a tanker ran aground or pipeline breached. This makes no sense whatsoever."

Yet there is little humour in this irony. Projects like the Enbridge Gateway pipeline will contribute to the cultural genocide of Carrier Sekani people by further destroying our forests and threatening our fish we've survived on for thousands of years. "The cumulative impacts from the mountain pine beetle infestation has forced our people to a tipping point," commented Tribal Chief David Luggi. "ENGOs should be working with our people since we are not going anywhere, we are in the best position to monitor and contribute to the healing of our planet," said Tribal Chief Luggi.

CSTC is calling on ENGOs to work on developing relevant polices with First Nations. "They need to operate with social conscience and credibility. FirstVoices did not accept dirty Enbridge money." Stated Vice Chief Teegee. "We can all work more effectively together, than we can apart. We're open to forming partnerships and alliances, but not when ENGOs compromise our values and integrity of the protection of our peoples and cultures", proclaimed Teegee.

http://www.marketwire.com/press-release/ENGOs-Do-Not-Speak-for-CSTC-1263
Posted by Next Year Country