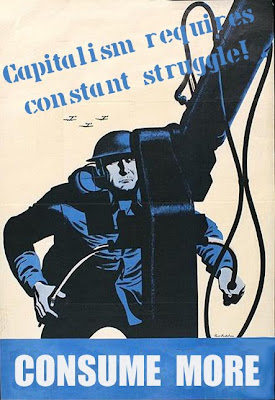 If there was any doubt – there wasn’t – that Canadians were whistling past the debt graveyard unconcerned about their and their children’s futures, reports in the past two days put them to rest. Canada is now the worst of 20 developed nations of the OECD in terms of personal debt. Every man, woman and child now has a personal debt of $41,740. That represents 140 per cent of average annual income and is two and half times greater than it was just 20 years ago.

An earlier story revealed that right now, with interest rates where they are, over 375,000 Canadian mortgage holders are “challenged” by their monthly payments. When interest rates hit 5.25 per cent, an additional 500,000 home “owners” will be in that situation. In other words, almost a million Canadian families will be cutting back on expenditures on food, clothing, education, travel and health just to stay in their homes. Tens of thousands will fail and many thousands will face bankruptcy. (The Canadian government is on the hook for virtually all the defaults.)

All of this would be certifiably delusional even if the country was booming and salaries and wages were increasing. It is utter madness in the current context. Wages and salaries are going down, if there is any identifiable trend at all. In fact, between 1980 and 2005 the real increase (after inflation) in average income was exactly $51 per year. That’s not a typo. The total increase in real dollars was just $51 over a period of a whole generation.

That should have been a wake-up call that the great consumer game was up. What kept people asleep was the transfer of manufacturing jobs in the tens of millions from the US, Canada and EU to Asia where cheap labour and non-existent environmental regulation allowed for the production of absurdly cheap goods. Those cheap goods allowed us to remain blissfully unaware of the consequences of our capitalist society, driven by the manufactured desire for more and more stuff.

This is a crisis for which a solution is difficult to imagine. Individuals, for the most part, are simply not equipped to deal with a culture that has been around for three generations and whose dream machine is ever-more sophisticated. Combine that with an increasing disengagement of people as citizens – that is, as people who imagine their future as part of the commons – and you have a formula for social, economic and political disaster.

Optimists may have imagined that the current combination of inconvenient truths would cause people to pause and re-examine their habits. We are at or past peal oil – its price will inevitably shoot higher in the next five years and could reach $200 a barrel. Our natural resources are becoming more and more expensive as they are inexorably depleted and the cost of mining them (using carbon based energy) increases. Add to this global climate change and the stupendous debts of governments – on top of individual debt – and you have the conditions for a kind of social Armageddon. 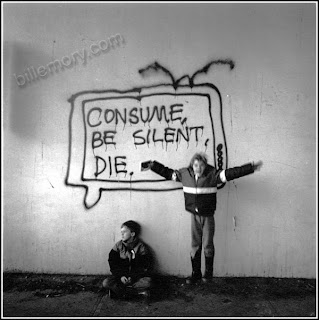 But trying to imagine a social movement, or a combined, unified movement confronting all of these crises, is a severe test even for those who have spent their lives organizing for and analyzing social change. No one in living memory has faced this kind of need for change. Many have imagined and fought for change they wanted – a more equitable world, a more sustainable world, a peaceful world. But this is different. The potential for entering a new dark age is very real. And it would not be confined to a few countries. The crisis is global.

The consumer madness indicated by the astronomical personal debt levels suggests an almost willful denial of reality – spending like mad because somewhere, deep down, we know it’s all going to be over soon and we might as well enjoy it while we can.
Posted by Next Year Country