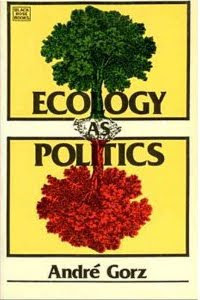 About 30 years ago, South End Press published Ecology as Politics by Andre Gorz, compiled from two earlier books released in 1975 and 1977. In this work Gorz, a French socialist whose friends included both Jean-Paul Sartre and Herbert Marcuse, came to terms with the capitalist division of labor and the nature of the technology used in production. He recognized the revolutionary changes that would be needed in these areas in order for the ideals of self-management he supported (in works of the 1960s such as Strategy for Labor) to succeed.

Gorz also began to recognize the importance of ecological issues for the socialist movement. In particular he became influenced by the work of Ivan Illich, a penetrating critic of industrialism who argued against the civic religion of production and limitless growth. Gorz addressed these themes in Ecology as Politics, as well as in books such as Farewell to the Working Class: An Essay in Post-Industrial Socialism and Paths to Paradise: On the Liberation from Work. His later books, such as Critique of Economic Reason and Capitalism, Socialism, Ecology, written in a cooler, drier style are extended meditations on themes he explored in his previous books, while Reclaiming Work: Beyond the Wage Based Society returns to the more passionate style of his earlier works. Gorz died in 2007, at age 84, in a suicide pact with his wife Dorine. She had terminal cancer, and they both agreed that neither wanted to live without the other.

Gorz's work can be seen as an exercise in what Immanuel Wallerstein calls "utopistics." Utopistics is distinguished from utopias, descriptions of an ideal and inevitable society, which Wallerstein fears can become breeders of disillusionment. Utopistics is the assessment of historical alternatives to depict a future which is reasonably better, and historically possible, but by no means assured. The point of utopistics is to galvanize political and social action. 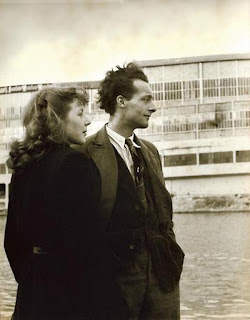 Andre Gorz analyzed human activity into two categories: "autonomous" (self-directed) and "heteronomous" (other-directed). Autonomous activities are truly self-managed. These are freely chosen tasks, performed by individuals or in cooperation with a like-minded group. Heteronomous tasks are constrained by social demands. Such tasks are imposed by the nature of the tools used, their organization, the division of labor and its global dispersal. The history of capitalism has involved the increase of heteronomous tasks at the expense of autonomous ones. The size of corporations and of the factories they have built, even the technologies used, have been designed expressly to thwart direct workers' control. Heteronomy limits self-management.

What is possible and desirable for Gorz is workers control through councils. "Technical self-management" is what Gorz called this kind of worker control, power over working conditions, relations, the duration and intensity of work. The very nature of heteronomous tasks however presents an obstacle to total self-management.

The nationalization of industries to bring them under social control is also necessary. These will be directed towards the production of new, durable varieties of consumer goods, easily repairable, without planned obsolescence or changes in fashion and style and engineered to last. Gorz took seriously the need to heed ecological limits and reduce production, particularly the production of waste. His slogan was "consume less, consume better!" Gorz hoped to replace much, though by no means all, industrialized mass production with small-scale autonomous production. He also favored measures such as banning automobiles from cities, encouraging renewable energy, and eliminating nuclear power. Gorz's project was to overcome the domination of economic rationality over the other spheres of society and undo the connection between receiving an income and a commitment to an ever expanding production. While Gorz did not however specify exactly what mix of energy sources would be used to run his vision of society, it would no doubt make smaller demands on natural resources than actually existing capitalism. 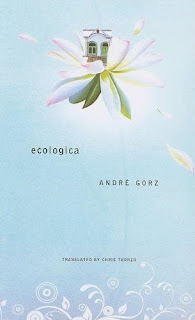 With less time devoted to it, and with the provision of a social minimum, even the work world of heteronomous production will be brought under greater control by the workers. Gorz did not advocate the complete elimination of heteronomous activities, which is not possible or even desirable. Instead he argues that a policy of reduced labor hours and a guaranteed income will stimulate and encourage the movement for self-management. Liberation from work implies liberation within work, and these tasks will lose much, though not all, of the alienation they inspire today. Workers' control would be implemented through a policy organizing industries in councils and assemblies. He expresses support for the idea of rotating jobs so as to share empowering tasks and information. Gorz even favored the creation and extension of consumers' cooperatives as the most democratic and efficient means available to consumers for their purposes. While some centralized planning would be necessary, Gorz was open to making the process more participatory, allowing for several rounds between the planners, producers and communities.

Gorz saw a party as being completely necessary to this transformation, setting the industrial, environmental, transportation, health and other policies needed for the massive reduction of production, and its management in ways that increase self-management, popular sovereignty over tools and resources as well as eliminating environmental damage - a party whose perspective is that its function is to encourage the "withering away of the state."

The necessity stems from the fact that the industrial proletariat prophesied by Marx is disappearing. There has been a loss, due to automation, of manufacturing sector jobs, and the growth of de-skilled, non-unionized, and service sector work. Increasingly workers define themselves by what they do outside of work rather than identifying with their jobs. Where then is the social base that can bring about a socialist transformation? While extra-parliamentary activities and direct action play an important role, a party is necessary to construct the popular hegemony of a completely different conception of society, and to become a collective agent of action. The conditions for generalized self-management must be created consciously by the party through the policies it promotes. Gorz chose to face what many leftists do not address regarding the actual structure and situation of the working class. 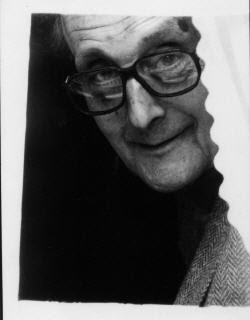 Gorz was skeptical about ever getting rid of the market completely. We know too little about human nature at this time to decide this question with any degree of certainty. No one honestly knows exactly where the limits of human nature lie, and we can't wait for everyone to agree before taking action. The proper approach is to have the intellectual honesty to admit that building a libertarian socialist society is a long term project that will take many generations, and may never be fully completed.
If the world left is ever able to put in place a libertarian socialist alternative to capitalism in crisis, this will require the application of utopistic thinking. The work of Andre Gorz provides us with material for utopistic thinking: a declaration of freedom from the productivist ethos.

Richard Burke is an artist and teacher. He is a member of the Industrial Workers of the World and the Surrealist Movement
Posted by Next Year Country