By Alistair Dawber
The Independent
April 29, 2010 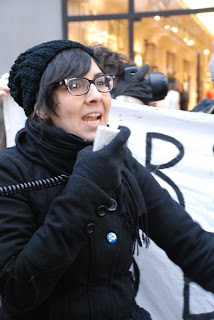 Protesters who accuse Royal Bank of Scotland of financing tar sands oil projects in Canada, which have been described as having a "devastating effect on the environment," said yesterday that the bank had failed to address their concerns.

Eriel Tchekwie Deranger said that Sir Philip Hampton, RBS's chairman, had not answered her questions during yesterday's AGM in Edinburgh, describing the bank's decision to lend to companies involved in tar sands oil exploration, as "deplorable". She asked Sir Philip to justify the RBS's decision to lend to companies that violate the human rights of the people living close to exploration projects in Canada.

Green groups claim that production of tar sands oil damages local habitats, and quickens the pace of climate change. The World Development Movement has claimed that RBS, which is 84 per cent owned by the UK taxpayer, has lent £1bn to companies involved in tar sands oil exploration projects.

RBS said that Sir Philip had addressed the questions, and that it did not provide specific project financing for tar sands oil exploration. He is due to meet with a number of environmental campaigners later today.
Posted by Next Year Country