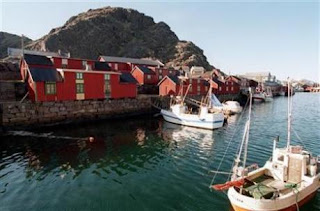 A classic battle pitting the oil industry against environmentalists and fishermen in Norway's Arctic seas is set to intensify on Thursday when the most thorough environmental study of the project to date is released.
Extracting oil from the chilly waters off the Lofoten and Vesteraalen islands is so divisive it could wreck the ruling Labour Party's coalition in this Nordic state that is the world's fifth largest oil and third largest gas exporter but also sees itself as a leader in environmental policies.
"If I were to point to one conflict that could spell the end of the present government, it would be this issue," said Frank Aarebrot, professor of comparative politics at the University of Bergen.

The Labour Party, led by Prime Minister Jens Stoltenberg, has kept the door open for drilling and has in the past been a supporter of the oil industry. But Labour's coalition partners, the Socialist Left and the Center party, are against.

The report commissioned by the environment ministry will assess conditions in the seas off the Arctic islands and assess the potential risks posed by oil and gas activities.

The area off Lofoten could hold some 20 percent of all remaining undiscovered reserves on the Norwegian continental shelf, according to the Norwegian Petroleum Directorate (NPD), at a time when petroleum production is on the decline.

Oil production in Norway peaked in 2001.

"In the long run Norway cannot afford not to investigate what is out there," Oystein Michelsen, Statoil's head of exploration and production in Norway, said.

"It's important for the country, there is a lot of value there. We should benefit from it," he told Reuters.

Not everyone is welcoming a potential oil boom in the region, however.

The seas off the islands are home to the spawning grounds of the world's largest cod stock and fishermen and environmentalists fear oil activities could endanger them.

"If any marine areas in Europe should be protected against the risk of oil exploration, these are the first candidates," said Rasmus Hansson, Secretary General of the World Wildlife Fund in Norway.

"They are the most productive and most valuable marine areas in Europe, no doubt about it," he told Reuters.

Thursday's report will be followed Friday with NPD's own report evaluating how much oil and gas could potentially be found in the areas, the result of seismic surveys it conducted.

The government is expected to make a decision on the issue by the end of 2010.

Aarebrot anticipated that Labour would be willing to break up the governing coalition on the issue as it could continue governing in a minority government.

In addition, he said, the politicians ruling northern Norway, a Labour stronghold, are in favor of oil drilling.

"It will be very difficult for Labour to deny the people in the North to have the same possibilities as the people in the West (where the oil industry in based) because they have many representatives in that region," he said.

About the Socialist Left Party 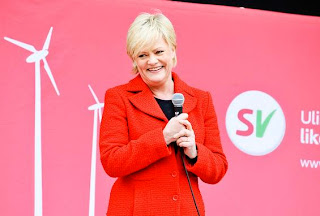 The red and the green is the basis for the Socialist Left Party of Norway’s (with the Norwegian abbreviation SV) policy.
The red symbolises that we want a society without class differences and social injustice. The green symbolises our work for an ecological sustainable society for the generations to come. All SV’s work in the Parliament, in local councils and in the party organisation, aim at a more just society with better environment.
“Change the world, it needs it”, was the appeal from Bertold Brecht. SV works for a fundamental change of the society. The differences between the richest and the poorest in the world are enormous. We live in a world where the 500 biggest companies own more than the 50 poorest countries. We live in a world where over a thousand million people have to survive on less than a dollar per day. Norway is one of the richest countries in the world. Still we have poverty. Still we experience that schools and other public services are declining. Furthermore, the global environmental challenges are huge. We know that the greenhouse effect can lead to big, negative changes in the world’s climate and environment. If we are to prevent this, we have to reduce the emission of greenhouse gases, especially in the richest part of the world. SV is working for solid and just solutions on these challenges.

Different people. Equal opportunities.
Read about our main objectives in this leaflet made for the 2009 election
Election Manifesto of the Socialist Left Party of Norway (SV), (English).pdf 452,05 kB
Posted by Next Year Country