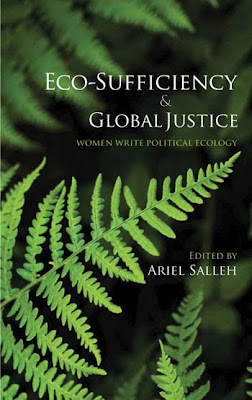 What material basis could women have that might make them an objectively environmentalist constituency? This theme is an important part of Ariel Salleh’s essays in her 2009 collection of women’s writing on the environment, which tries to bring together ecofeminist and ecosocialist ideas into a synthesis.

The essays examine and take the side of the third world poor, and especially of indigenous people, peasants, and the women in those communities.

Salleh distances her materialist ecofeminism from “what ancient woman-nature mythologies say — that women have a fixed, innate identity or essence, which is ‘closer to nature’ than the essence of men is”. She rejects this characterisation of ecofeminism, but also rejects the liberal feminists who see all ecofeminism as mysticism.

Her ideas are based in women’s experience in the global division of labour. “The global majority of women do labour hands-on with nature and cope with the matter/energy transformations of their own gestational bodies.”

She also points out that, as women are often poor in time as well as money, “the timing of reproductive labour tasks is slower than the speeded up pace of capitalist working time, because regenerative work is bound to preserving, not interrupting natural processes.” This echoes the analysis of agricultural labour made by Marxist ecologist Richard Lewontin.

Lewontin argued in the 2000 book, Hungry for Profit, that the persistence of small proprietors in farming even in highly industrialised economies such as the US is related to the fact that in agriculture, “the cycle of reproduction of capital cannot be shortened because it is linked to an annual growth cycle in plants, or a fixed reproductive cycle in large animals”.

Ecosocialists look to learn from the experience of indigenous, pre-industrial cultures because of their complex interaction with and understanding of their natural environment.

Socialist Alliance’s water management policy includes the statement: “The knowledge of Indigenous communities is an essential part of … developing sound proposals for water conservation.” Themes like this recur in the book.

The various essays differ significantly in their quality and usefulness. At worst, some essays are impenetrably abstract — overly concerned with debates inside academia. But there are also some very good essays such as Nalini Nayak’s “Development for some is violence for others”.

Nayak examines how neoliberal “progress” has destroyed the status and livelihood of women (in particular) in Indian fishing communities.

The essay blames what might seem to be progressive modernisation — larger boats, motor boats, net-making machines and so on. Clearly, economic justice for the poor does not result from capitalist economic development in general. This lesson can be useful for activists looking to support environmental sustainability, women’s liberation and alternative avenues of development for the world’s poor.

The main let-down of the book is the overly academic tone of much of the writing, including Salleh’s own essays. For someone who is not accustomed to reading academic texts, it can be impenetrable. In some sections, a familiarity with many other academic works referenced is necessary — and possibly a dictionary as well.

This is a pity as many of the points raised are central to current ecosocialist debates, and deserve to be explained to a broader audience.

For those willing to make the effort, there is stimulating material in this book.