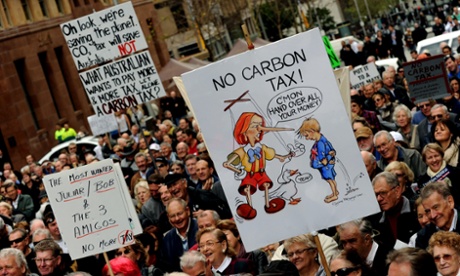 
The Harper government withdrew from the Kyoto protocol on climate change in 2011and Canada has failed to meet its own international emissions to cut greenhouse gas emissions – almost entirely because of its mining of the carbon-heavy Alberta tar sands.

But the praise for Australia marked the first time Canada has actively sought to discourage other industrialised countries from following through on their own climate change commitments.

On a more combative note, Canada on Wednesday went on the attack against the European Union's move to class carbon-heavy Alberta crude as a dirty fuel, labelling the finding as "unscientific".

Calandra, in his statement congratulating Australia, went on to claim that Canada is reducing greenhouse gas emissions. But that claim was at odds with the latest finding from the government's own Environment Canada that the country would blow through its international climate commitments by the end of the decade.

Under Canada's current trajectory, emissions were projected to be 734 mega tonnes – or 122 megatonnes higher than Canada's target of 612 tonnes under the international accord the country agreed in 2009.

Canada had agreed at the time to align its climate plan with America's and cut emissions 17% from 2005 levels by 2020.

But Environment Canada in its latest report projected that the country's greenhouse gas emissions by 2020 would amount to barely a 3% drop compared with the promised 17% cut.

Greenhouse gas emissions from Bitumen production are expected to rise four-fold by the end of the decade, according to Environment Canada.

Australia is the developed world's worst polluter per head of population, but Canada, under the Harper government, is close behind at 16.2 tonnes .
Posted by Next Year Country