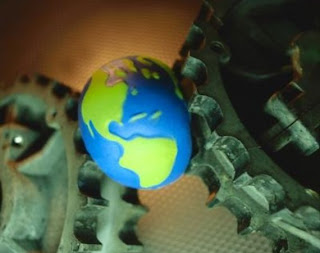 Environmentalists and scientists often refer to the two different ends of the environmental problem as sources and sinks. Thus the environmental limits to economic growth manifest themselves as either: (1) shortages in the “sources” or “taps” of raw materials/natural resources, and thus a problem of depletion, or (2) as a lack of sufficient “sinks,” to absorb wastes from industrial pollution, which “overflow” and cause harm to the environment.1 The original 1972 Limits to Growth study emphasized the problem of sources in the form of shortages of raw materials, such as fossil fuels, basic minerals, topsoil, freshwater, and forests.

Today the focus of environmental concern has shifted more to sinks, as represented by climate change, ocean acidification, and production of toxics. Nevertheless, the problem of the depletion of resources used in production remains critical, as can be seen in discussions of such issues as: declining freshwater resources, peak (crude) oil, loss of soil fertility, and shortages of crucial minerals like zinc, copper, and phosphorus.

Fred Magdoff is professor emeritus of plant and soil science at the University of Vermont. He is coauthor with John Bellamy Foster of What Every Environmentalist Needs to Know About Capitalism (Monthly Review Press, 2011)
Posted by Next Year Country

Email ThisBlogThis!Share to TwitterShare to FacebookShare to Pinterest
Labels: Population